Griffin & Codd on the mark with Quary 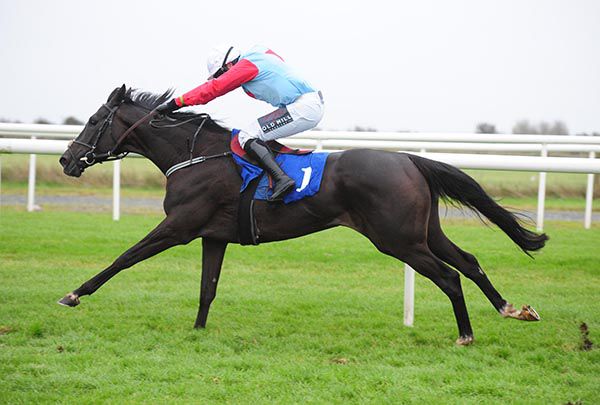 The Eoin Griffin trained Castletown Quary ran out a good winner of the season finale at Roscommon, the Thanks For Supporting Roscommon Racecourse INH Flat Race.

Successful in a point-to-point for Andy Slattery at Horse And Jockey in March, the son of Scorpion was then sold for 50,000 pounds at Goffs the following month.

He put in a fine performance to finish third on his racecourse debut at Listowel last month, and was sent off an easy to back 4/1 chance today, having opened on-course at 11/4.

Settled in mid-division by Jamie Codd, the bay victor took closer order on the outer approaching the straight.

He soon came with his challenge, and was pushed along to lead over a furlong from home, keeping on well from there, despite wandering slightly, to score by six and a half lengths.

Everybreathyoutake (8/1) finished second under Lisa O'Neill for Gordon Elliott, while Gateway To Europe (16/1) was another length and a quarter back in third, with Derek O'Connor aboard this one of Brian Nolan.

Presenting Leah was sent off the 7/2 favourite, and she finished a disappointing eighth.

Griffin, who trains the winner of the Great Palls Partnership, said afterwards: "He's a nice horse but still has a bit of growing up to do. He's green but had enough in the tank to do it.

"He will handle soft ground but I don't think he’ll go on real heavy winter ground."