Heliac takes the "Red God" on the way to better things 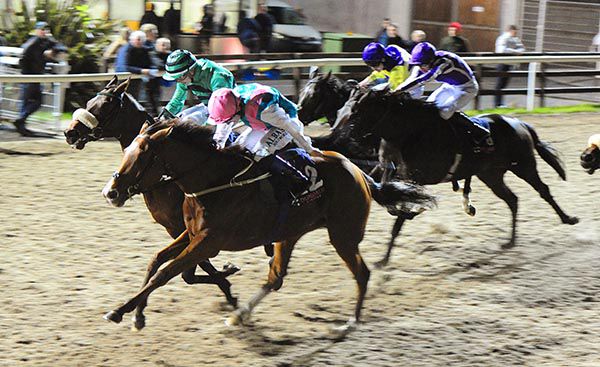 With Colin Keane serving a 1-day ban Chris Hayes stepped in for the ride on Heliac and the three-year-old beat mainly older rivals in the featured Irish Stallion Farms EBF “Red God” Handicap at Dundalk.

Quadrilateral took Group One honours in Khalid Abdullah’s colours in the Fillies Mile at Newmarket earlier, and Heliac could give Juddmonte some good days ahead too.

Hayes hit 50 for the season as he got Heliac home by half a length and a length from Massif Central and Charcor.

Winning trainer Ger Lyons’ second jockey Gary Carroll was on Inscribe (6th) as he wouldn’t do the eight stone ten weight on Heliac.

Hayes rode his first big winner, for Lyons on Amourallis in a 100K handicap at Galway in August 2004.

Lyons said: “It’s a long between drinks with me and Chris. Amourallis was his first big winner and he rode it for me (winning the featured 100,000 seven-furlong handicap on the Sunday of the Galway Festival in 2004), and I think that’s his second winner for me now.

“She’s a filly I like and you can see the way we protected her. Chris has just said we’ll have great fun with her next year.

“I’ve always thought of her as a potential Stakes horse but not at three. She’s going to mature over the winter and I’d say that’s going to be it subject to talking to Teddy and the team.

“I’d like to put her away and look after her for next year. This was a big target to prove whether she was good enough to stay on the team or not. It’s a nice pot to win.

“She’s still a bit weak but she will stay further. The future is bright for her and it takes a nice three-year-old to win that race.

“If we get through this winter and we have it redone next year then we are back to having this as one of the jewels of Irish racing.”