Popong capitalises as favourite tips up at last 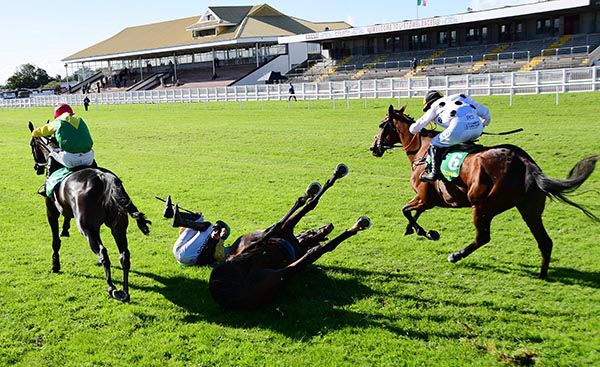 Popong (9/4) took the Ballygarry House Hotel Mares’ Novice Chase after the 6/5 favourite Western Victory came down at the last when in front.

The market leader had put in a fairly sound round of jumping and looked the winner most of the way, but her nearest pursuers were still snapping at her heels as they approached the final fence.

The favourite clipped the top of it and came down, leaving Rapid Response (5/1) and Popong to fight it out up the run-in. Rachael Blackmore’s whip went flying out the side door but it mattered not as her mount found enough to score by three quarters of a length.

The winner won twice over hurdles and had been runner-up on her chasing debut at Tipperary in July.

Winning trainer Henry de Bromhead said: "She really toughed it out. Conditions wouldn't have been ideal for her and her jumping went to pot a little bit halfway through the race.

“Rachael nursed her around and we got back into it. Obviously we had a bit of luck at the last but I'm delighted for the lads.

“She hadn't run for a while before Tipperary and got tired there. I thought she ran fine that day but we were hoping she'd be better than that.

“That was a great run today and it's great to get her to win one over fences.”