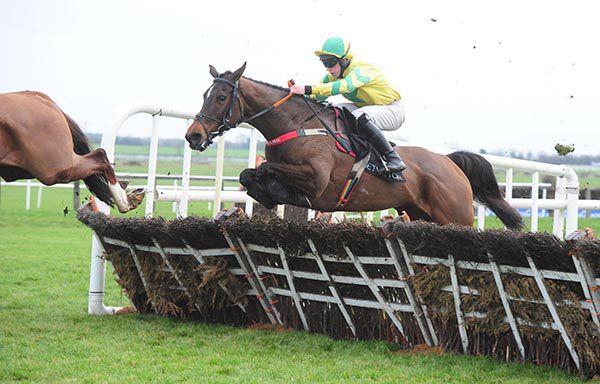 Dermot McLoughlin saddled a 1-3 in the BetVictor Handicap Hurdle, led home by Beeper’s Ruby, after the complexion of Fairyhouse’s fourth event changed at the second last flight.

Favourite Chosen Hour was shaping like a winner in front under Sheila Ahern when making a bad mistake and unseating at the penultimate hurdle.

Beeper’s Ruby (14/1) and Conor Maxwell soon pounced on their opportunity and eventually held Cappuccino Man (9/2) and stable companion Wee Small Hours (8/1) by a length and a quarter and three parts of a length.

“She’s a nice mare but I thought she wanted a bit more juice in the ground. Conor said she travelled through the race and quickened up well. She did everything right," said McLoughlin.

J.W. Kennedy, rider of Rio De Cerisy (FR) trained by Gordon Elliott, reported to the Clerk of Scales that his mount was pulled up after the third last hurdle as he did not feel right having made a bad mistake.