2 and counting for Lyons at Dundalk 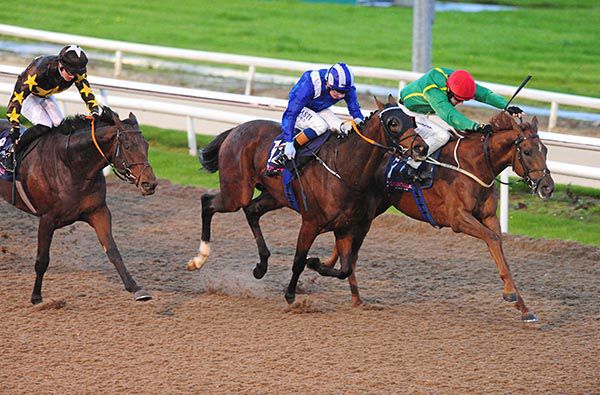 Ger Lyons brought up a 42/1 double in the opening races at Dundalk as Long Arm triumphed in the Crowne Plaza Race & Stay Handicap.

This fellow, a son of Rock Of Gibraltar, is now two from two after winning on debut at Gowran in late July.

For one of such little experience, Long Arm (9/1) showed a commendable attitude in the heat of battle to see off Moktamel (9/2 into 7/2 joint favourite) and Nimitz by half a length and the same.

Lyons won the first, the claimer, with the John Shinnick-ridden Major Reward

“He's a half-brother to Who's Steph and it's patience, patience with him,” said Lyons.

“He had a real bad stone bruise about a week or so after he won in Gowran and we just couldn't shift it, it took forever.

“He's a nice person of a horse! We took our time with him and I thought he was nearly finished as I wasn't sure whether this place was going to be riding well enough for us or not.

“The last few weeks when we started back I said 'right that's riding well enough' so we put him in, got a mark said we'd have a look at this race and then put him away to next year.

“We'll let him go baby steps next year. It was a nice performance and with another winter under his belt he might just be a nice horse, he's well related.”