2 from 2 for Whelan at Dundalk on Annabelle Rock 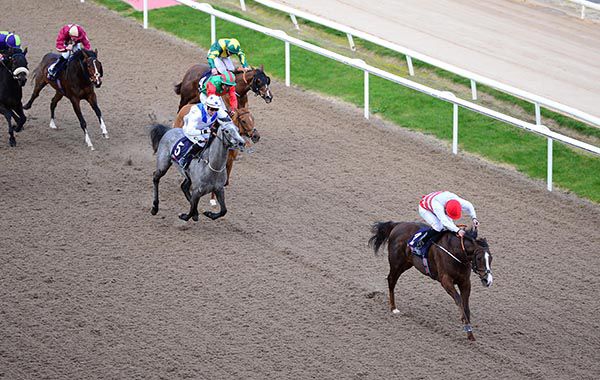 Ronan Whelan rode his second winner in as many races at Dundalk when Annabelle Rock (11/4 into 9/4 joint favourite) did the business in the Marshes Shopping Centre Ladies Day Sunday 14th April Handicap.

Ado McGuinness has care of the Dandy Man filly for owner/breeder Tom Heatrick, and she ultimately did it comfortably, by three and a half lengths from She’s My Dream.

“She's on the up this filly,” said McGuinness.

“She's all heart and she's very versatile, she's after winning over five, six and seven. I think six is her best trip.

“I hope the handicapper doesn't kill her. She's tough and everything that battled with her she battles.

“I think there might be something here for her next month so we could come back here and then tip away with the grass.

“I think she'll improve again and hopefully it will keep going.

“Tom Heatrick owns her, he's a north of Ireland man, and I think that's his third winner in the last couple of weeks. Ty Rock Brandy also won last week for him. He's after having a great season up here during the winter and hopefully it will keep going.”

Ronan Whelan's opening winner was Luna's Luck for Michael Halford in the claimer.