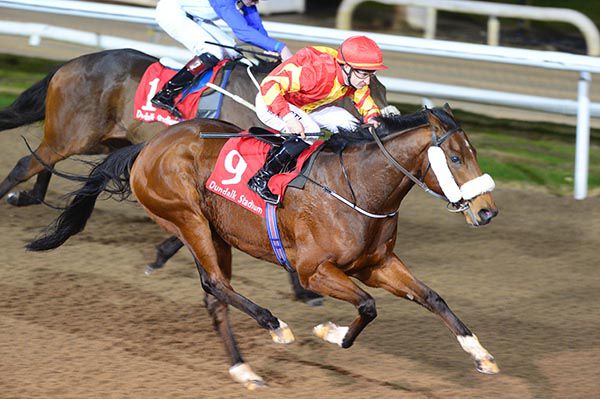 Earlier Kilkenny man Foley partnered Gougane Barra (13/2 into 5/1) to a well-received success in the 6.30 for Michael Halford, and Confrontational had his supporters too, shortening from 12/1 into 10/1.

In the Classic winning silks of Mrs Regalado-Gonzalez, Foley got the now three time winning five-year-old home with a length to spare over Tony The Gent

“I thought he would get the trip (a mile). He can be a bit forward going and keen but he settled away well in front and got it easy enough,” reported Foley.

“He's a grand old horse. They've had the hood on him for a while and I asked George (Murphy) to take it off him a while ago and he took it off tonight for the first.

“He's not easy at home and they do a good job with him at home. He's won well and saw it out well.

“He's had the hood on and he's been racing lazily in behind. I was happy that the lads said they'd let me do my own thing tonight and he enjoyed it.

“I think he was having a good look at everything and if something had come to him I think he would have went again.

“I knew the way he picked up turning into the straight that it was going to take fair one to get to him and thank-God he stayed going.”

B.M. Coen, rider of Sheisdiesel (GB) trained by Noel Meade, reported to the Clerk of Scales that his mount's saddle slipped.

At the request of the Stewards, G.P. Halpin, rider of Massa Lubrense trained by John Geoghegan, reported to the Stewards' Secretaries that his mount never travelled.

The Irish Horseracing Regulatory Board Veterinary Officer examined Georgian Bay trained by Adrian McGuinness, at the request of the Stewards and reported the animal to be post race normal.

The Irish Horseracing Regulatory Board Veterinary Officer examined Massa Lubrense, trained by John Geoghegan, at the request of the Stewards and reported the animal to be post race normal.