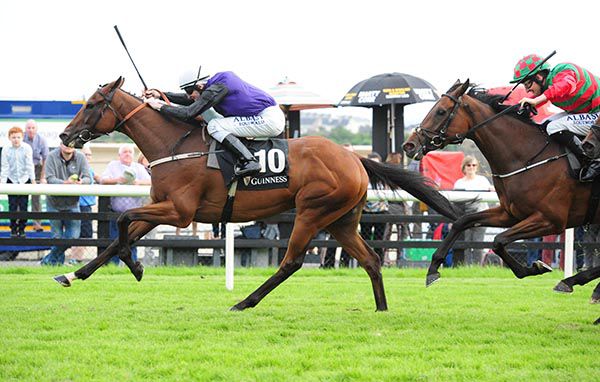 His brother Tom took the opening 80K pot, Willie followed up with Minella Beau in the 80K Blazers, and the Mullins maestro from Closutton put the cherry on top for the County Kilkenny family with Mr Adjudicator in the Guinness Premier Handicap at Galway.

This was nice compo for well-backed (15/8 into 11/8 favourite) Mr Adjudicator, taking the 120K centre-piece, after his unlucky fourth placing in the opening evening highlight on Monday.

Kevin Manning was in the plate on the David Bobett-owned Camacho gelding, victorious in the Grade Two Prix la Barka at Auteuil in June.

A top-level juvenile hurdler, Mr Adjudicator benefitted from Manning’s strength to record a three parts of a length and a half length verdict over Camphor and Latoyah Of North

Great veteran Manning flagged up that he might up two pounds over the allocated eight stone eight for Mr Adjudicator. Not long back from an injury Jim Bolger's stable jockey, fully-committed as ever, done the weight, as light as he'd go.

"Kevin was very forceful on him and made up his mind in the dip. I said to him that the horse was very sluggish coming out of stalls and to try and get a position on him and he got a lovely position on him early on," said Mullins after win 9 of Galway 2019.

"He made the horse's mind up in the dip but said he got there a little too soon.

"It is nice compensation (for Monday) and the horse hadn't been lucky all season until Punchestown (in May) when it came right, and it came right again at Autueil.

"God knows when he last had a break so we'll have a review of his season and we'll see what is coming up. I imagine he could get a break as we have campaigned him hard this season and I think he could improve a lot as in jumping terms he is young."