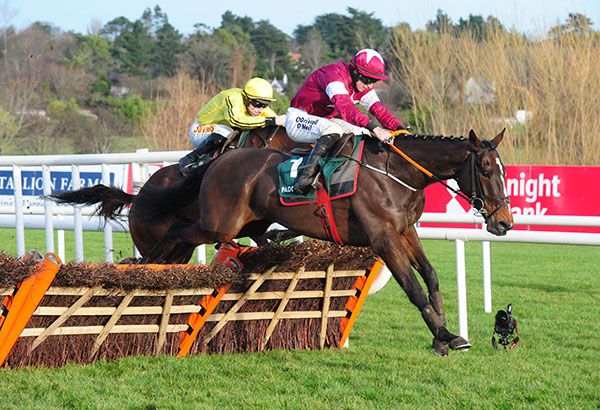 Abacadabras got back on the winning trail with an ultimately comprehensive success in the Paddy Power Future Champions Novice Hurdle.

Gordon Elliott’s charge won his first two starts over hurdles — including a Grade Three at Navan — before filling the runner-up spot behind stablemate Envoi Allen when stepped up to Grade One level in the Royal Bond at Fairyhouse.

He was the 10-11 favourite to go one better and, despite not always convincing in the jumping department, eventually mastered outsider Heaven Help Us to seal an eight lengths victory under Jack Kennedy. Blue Sari runner-up to Envoi Allen in last season’s Champion Bumper, dropped out tamely early in the straight and trailed home last of four.

Elliott said, “He’s got a bit of pace and we rode him for it. I’d say the hurdle flicked back at him going down the back (straight), but he’s professional enough and I’m happy with him.

“He’ll probably come back here in February. I’d say a bit better ground would suit him as he doesn’t bend his knee too much and just flicks across the top of the ground.

“When he got to the front he didn’t do a stroke again. He did exactly the same with Lisa O’Neill when he won a bumper in Galway. He’s a nice horse.”

Betfair and Paddy Power make Abacadabras their 7-2 favourite (from 6/1) for the Supreme Novices’ Hurdle at Cheltenham in March.