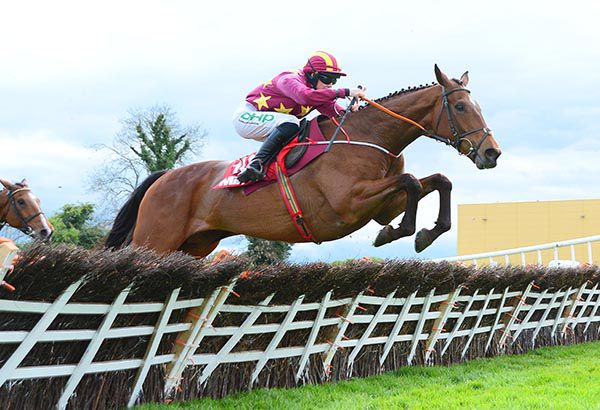 Rachael Blackmore rode her third Grade One winner when Minella Indo confirmed himself the star of this sphere for the 2018/19 campaign in the Irish Daily Mirror Novice Hurdle at Punchestown.

Unfortunately Gigginstown pair Commander Of Fleet and Defi Bleu pulled up with a circuit to race.

Making the pace, favourite Allaho (3rd behind the winner in the Albert Bartlett at Cheltenham) was looking good for much of the three mile trip.

However quick as a flash the tide turned in Minella Indo's direction in the straight.

Punters were soon ruing the fact that the impressive Cheltenham scorer was left go off a 5/1 shot as he raced on for a two length victory over the Willie Mullins pair, Allaho and Carefully Selected

Paddy Power now go 8/1 from 12/1 about Minella Indo for the 2020 RSA Chase. Of course the Beat Hollow gelding began his career with an impressive point-to-point win for John Nallen.

“I thought turning in Ruby had us all gone but he just stays so well,” said winning trainer Henry de Bromhead on the Barry Maloney-owned victor.

“Rachael said as soon as she pulled him out he took off and he pricked his ears coming to the last.

“It's lovely to come here and win this on top of the Albert Bartlett. I'm a bit lost for words to be honest, just delighted.

“Chasing is the plan next season. That's what he was bought to do, he won a point-to-point, and that will be the plan.”

When asked if the RSA would be the target next year he added:-

“We'll see, he's hopefully that calibre but obviously he has to take to fences. If he does that's the kind of stuff we'll be aiming for.

“It's fantastic to win a Grade One here. I'm delighted for the lads and delighted for Rachael, she's just riding out of her skin.”

The Irish Horseracing Regulatory Board Veterinary Officer examined Commander Of Fleet, trained by Gordon Elliott, at the request of the Stewards and reported the animal to be lame post race.

The Irish Horseracing Regulatory Board Veterinary Officer examined Defi Bleu (FR), trained by Gordon Elliott, at the request of the Stewards and reported the animal to be lame post race.

J.W. Kennedy, rider of Commander Of Fleet trained by Gordon Elliott, reported to the Clerk of Scales that his mount was pulled up having failed to travel and felt wrong behind .

D.N. Russell, rider of Defi Bleu (FR) trained by Gordon Elliott, reported to the Clerk of Scales that his mount was pulled up having struck into himself.