All eyes on Almond Eye in Meydan 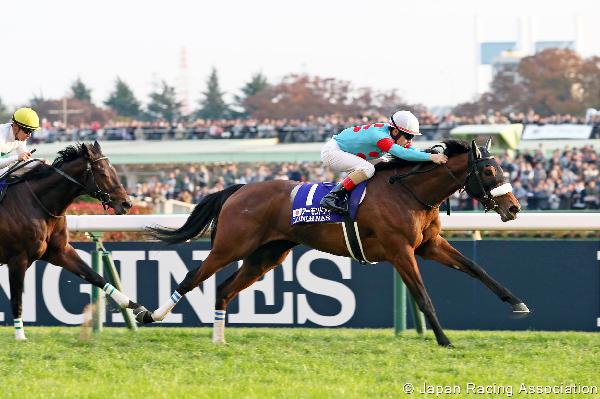 Japanese superstar Almond Eye is the undoubted main attraction in the Dubai Turf at Meydan.

Sakae Kunieda’s four-year-old filly is unbeaten in five starts, including top-level triumphs in the Japanese 1000 Guineas and the Japanese Oaks before beating the boys in November’s Japan Cup.

Connections have already identified the Prix de l’Arc de Triomphe at ParisLongchamp as her long-term objective, with York’s Ebor meeting in August mooted as a potential stepping-stone.

However, she must first come through this weekend’s Group One assignment over nine furlongs.

Addressing the assembled media after seeing his stable star enjoy a spin on the track on Wednesday morning, Kunieda said: “She loves this place. When she came to Dubai she became relaxed and her appetite is good.

“She enjoyed the turf track (during morning exercise). Dubai provides big races and after the Japan Cup, we decided to choose this race.

“In the Japan Cup she won from the front and in other races she was (further) back, so both cases are OK.”

Leading French jockey Christophe Lemaire has steered Almond Eye to each of her last four victories and is relishing the opportunity to renew the partnership this weekend.

He said: “Almond Eye can handle any kind of trip and any kind of race. She’s a tremendous filly with a lot of ability.

“The engine is still there and I’m really looking forward to riding her on Saturday.”

The son of Frankel is three from three at Meydan this year — after being gelded during the off-season — and struck gold at Group One level in the Jebel Hatta three weeks ago.

Bin Suroor, who also saddles outsider Mountain Hunter, said: “He is unbeaten in Dubai this year and is a Group One winner.

“He is in good form and looks good. The Japanese filly is a tough filly, obviously.

“Hopefully our horse can jump well and get a good position.

“Our other runner, Mountain Hunter, also likes to be near the front and is there to take his chance.”

Charlie Appleby’s Wootton was favourite to beat Dream Castle in the Jebel Hatta, but had to make do with the runner-up spot.

He is a third Godolphin runner in a 13-strong field.

“I was very pleased with his last run — stepping up to nine furlongs. If he reproduces that form, he should be very competitive for the placings,” said Appleby.

“We have all got Almond Eye to beat, but we are on home turf and he has a couple of runs out here under his belt.

“What I like about him is that he is learning to race the right way round — he is settling better now and finishing his races out well.”

Without Parole looked a top-class performer for John Gosden after winning each of his first four starts — including the St James Palace Stakes at Royal Ascot.

However, he returns with something to prove after being well beaten in the Sussex Stakes at Goodwood, the Juddmonte International at York and the Prix du Moulin at ParisLongchamp.

Gosden said: “He is in great order. He is going to have the pleasure of having a look at a super filly in Almond Eye.

“He has pleased us and I’m confident a mile-one/mile-two will be his distance this year.

“These Frankels can see out that last part well and he is probably going to be at his best over a mile and a quarter.”