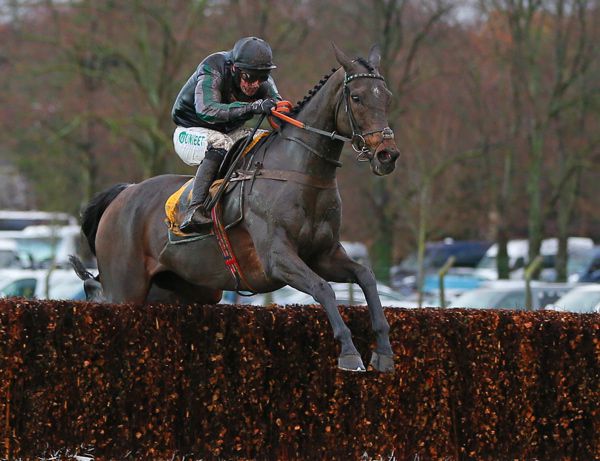 For many, the biggest Christmas present this year will be getting the chance to see Altior strut his stuff in the Unibet Desert Orchid Chase at Kempton.

While the carrot of a first crack at three miles in the King George had been considered by his owner Patricia Pugh, trainer Nicky Henderson was never truly sold on the idea — this year at least.

While Henderson is keen to tackle three miles with him at some point, he did not feel it was in Altior’s best interests to do it this year, especially with it coming just 18 days after an epic race with Un De Sceaux in the Tingle Creek.

However, he is quite happy for him to keep to two miles, with an extra 24 hours’ recovery, for a Grade Two he last won with Sprinter Sacre in 2015.

Altior has won all his 10 races over fences to date and won all five over hurdles, with his last defeat coming in the Punchestown Champion Bumper in 2015.

Henderson said: “Everything has been very good, and he is in great form. Nico (De Boinville) suddenly decided he wanted to school him the day before yesterday. I couldn’t see the point, but it was good to watch.

“It was only the next day he had the issue with the foot (after Sandown), but we took the shoe off and tidied it up and he was fine after that. It was a proper race at Sandown.

“They will go a good gallop, and there will not be any messing about. This was really the plan. It is a good prize, the timing is right because it will bring him nicely into the Clarence House — then we will probably put him away until Cheltenham.”

Big-race jockey De Boinville told his Unibet blog: “Un De Sceaux had his conditions there, and is a proper Grade One horse, so for Altior to dig in and then quicken up the hill as he did spoke volumes about him — his attitude as well as his class. I schooled him on Christmas Eve and gave him a breeze-up on Boxing Day morning, and all is good.

“You should never under-estimate the opposition, and he does carry a 6lb penalty, but of course we will be disappointed if he is beaten.”

Taking him on is Special Tiara, a former champion chaser and dual winner of this contest in 2014 and 2016.

The soon to be 12-year-old finished third behind Castlegrace Paddy on his reappearance but will find the ground at Kempton much more to his liking.

Nigel Hawke is having a crack at Altior with Speredek, who made giant strides last year and was second to Un De Sceaux in the Clarence House Chase.

He was second under a big weight in a valuable handicap on his return to action, which was his first run since wind surgery.

Gary Moore runs the novice Diakali, who won his first three over fences but was pulled up in the Henry VIII Novices’ Chase last time out.

He runs in this in preference to taking on the winner of that race, Dynamite Dollars, again in the Wayward Lad Novices’ Chase.