Amy gets a deserved win to her name 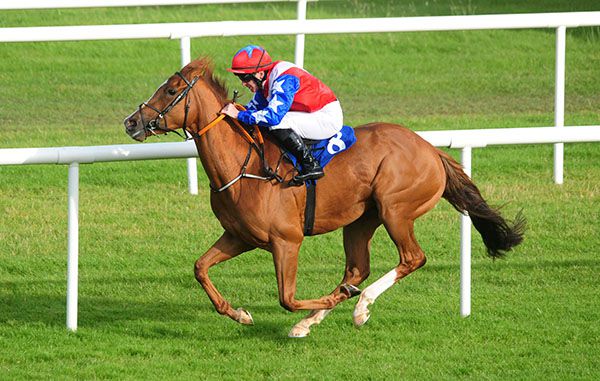 Angel's Amy got a deserved win to her name, as she made virtually all in the Murray Ambulance Maiden.

Having filled the runner-up spot on her first three starts, all of which were at Gowran, the Joe Murphy trained chestnut dropped in trip to seven furlongs this evening (from a mile and one).

Sent off the 15/8 favourite, the daughter of Dragon Pulse raced in a share of the lead early on, improving to the front on the approach to the straight.

She was ridden and extended her advantage with over a furlong left to race, keeping on strongly from there, going on to score easily by five lengths. Dedillon (3/1), who raced in a share of the lead early on, finished second under Andrew Slattery for his father Andy, while the Paul Flynn trained Mk Drama (12/1) was a further three lengths back in third.

"We'd been waiting for that and she won as she should. She's a nice filly, we were worried about the ground but she seems to handle it and seven to a mile is her trip," said Murphy.

"She's owned/bred by Alfred (Sweetnam) and I think she might go forward after that.

"I don't know how good that maiden was but she's been second three times, we thought we were a bit unlucky, but she's done it today and you have to win your maiden now at three to go to stud.