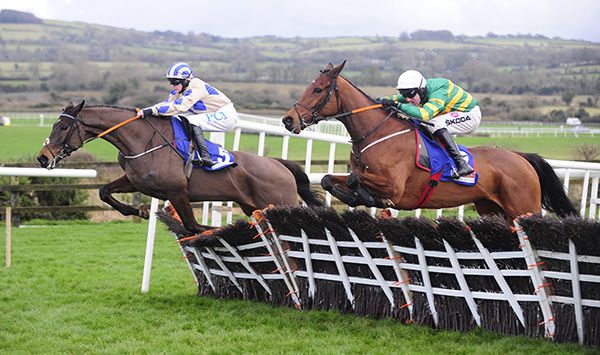 The son of Doyen's only previous defeat came in a similar Grade 2 contest, over a half-mile further 2m4f trip at Navan in December and was today sent off the 8/15 favourite to beat five rivals. Anything Will Do set the early pace but was headed by free-going Captain Guinness the eventual runner-up, before the fourth hurdle.

Leader Captain Guinness was still travelling strongly after the second last as Andy Dufresne was the first of the leading pair to come under pressure. 'Every man's got a breaking point' however and Captain Guinness' earlier exertions meant he had less in reserve in the closing stages as Andy Dufresne went by on the run-in and was able to grind out a three parts of a length win.

Winning trainer Elliott later said “he got beat by a good horse of Paul Nolan’s (Latest Exhibition) the last day in Navan where he probably outstayed us but that was more like it today.

“Mark (Walsh) said the inside track was tight enough for him here over two miles. He took a bit of organising around the last bend but when he straightened up he jumped the last well.

“He galloped to the line and has won over two and a half.

“I’m not sure what the plans are and I’ll have to talk to the lads. I still don’t think two and half is a problem to him — he stays well. The way he moves he’ll probably be better on better ground.”

Captain Guinness' trainer Henry de Bromhead was upbeat following the defeat and later said “he got a bit strong but galloped away and jumped well. I’m delighted for a horse only having his second run.

“He was quite free and was entitled to get found out a little bit and it didn’t help that he got in a bit close to the last. Obviously Andy Dufresne is a very good horse so we’re delighted with the run.

“He’s in the Grade 1 at the Dublin Racing Festival. It may be a bit close but we’ll see how he is.”

Paddy Power bookmakers reacted to the race by cutting Andy Dufresne to 12/1 (from 16s) for the Supreme Novice Hurdle at Cheltenham although BoyleSports left him unchanged at 16/1.

Runner-up Captain Guinness was later cut to 20/1 (from 33/1) with Paddy Power for that same Cheltenham curtain-raiser race and was introduced at 16/1 with BoyleSports.