Ask has Answers as Townend doubles up 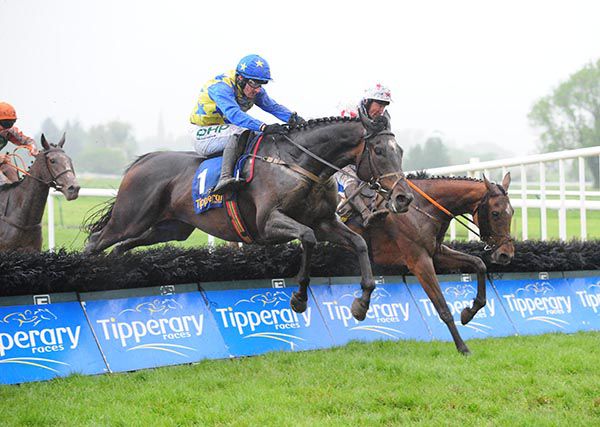 Ask And Answer stayed on best to land the spoils in the three-mile handicap hurdle at Tipperary to give champion jockey Paul Townend a double on the night.

The Sean Aherne-trained gelding had finished fourth on his most recent outing at Cork and stepped forward again to open his account.

Townend produced his mount to challenge turning for home and four fought it out going to the last flight.

The Ask gelding found most on the run-in to post a two-length verdict over Darling Miss There was just a head back to Ahgetawayoutadat with long-time leader Open To The World back in fourth.

"He is a big horse, he needed plenty of time and is going the right way which is a help,” said Aherne.

"We thought he might be a real soft ground horse but Paul had a different opinion and said he'd handle it as long as there was a little give in it during the summer.

"He is owned by a good man (Eoin Barry) who is a big help to me.

“Eoin is from Tallow and is based in Boston and we had a horse Beantown together which was beaten a neck at Cheltenham (in 2006). He has two or three horses in training with me and is a big help to me."