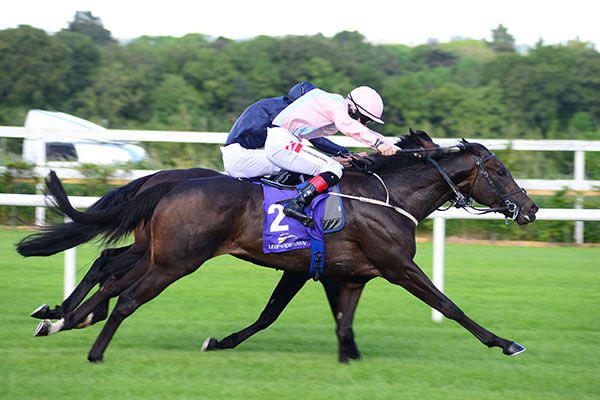 “That was a lovely professional performance. We’re lucky that we are getting the baby steps into him quietly, and he really needs a minimum of a mile," said winning trainer Ger Lyons after Basic Law (10/11 fav) brought up his hat-trick in the Leopardstown Golf Centre Rated Race.

Under Colin Keane Basic Law was prominent early in this seven furlong heat.

Soon waited with in the small field, the Lawman gelding was pushed along to improve two furlongs out.

Ridden to go second a furlong and a half out, Basic Law kept on to press leader All The King's Men inside the final furlong.

The progressive Lyons runner then led close home to win by a head.

“He likes a bit of juice in the ground. Colin said its beautiful ground but that’s as quick as he’d want it. He’ll step up to a mile be it in a Listed race or a Premier Handicap," elaborated Lyons.

“I think he’s going to be a lovely four-year-old, and a mile and two horse eventually. He’s learning every time, and if he got beat tonight it would have been pure trainer error for running him over seven. I doubt we’ll run him over that trip again.”