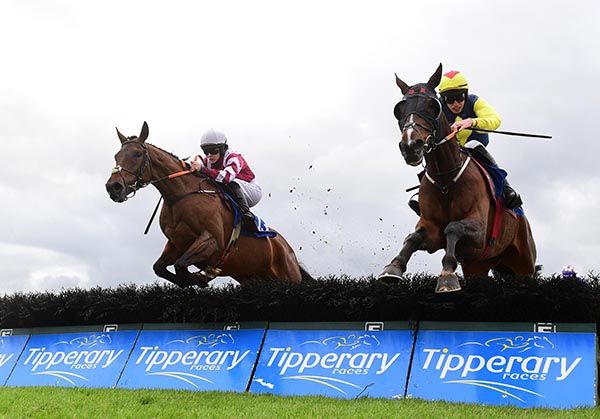 Successful in a point-to-point when trained by John Halley, the son of Westerner disappointingly pulled up on his most recent start at Tramore on New Year's Day.

Well-fancied to make the breakthrough over flights this evening, the six-year-old was sent off the 7/4 favourite from early shows of 7/2.

Settled behind the leaders on the inner, the bay victor improved into a share of the lead before four out. Headed and pushed along from the next, he soon dropped off the front pair and appeared to be struggling in third.

Ridden away from the second last, he came with a renewed effort approaching the final flight, getting to the front inside the final 150 yards before going on to prevail by a length-and-three-parts. Run For Pat (7/1) filled the runner-up spot under Jack Kennedy for Gordon Elliott, while Ramondo Dnzeo (18/1) was another two-and-three-quarters of a length back in third. Sammy Smart (7/2) appeared to be travelling best approaching the straight, but he faded tamely once ridden after the second last, eventually finishing fifth.

"He's a galloper and there is plenty of fun to be had with him over the summer," said Blackmore who was earlier successful on Coole Arcade

"That's only his third run for Henry so hopefully he can continue to improve."

Shane Fenelon, rider of Larkins Luck (GB) trained by E.Sheehy, reported to the Clerk of the Scales that his mount never travelled and was pulled up.

R. Deegan, rider of Secret Location trained by Mrs Julie Cashin, reported to the Clerk of the Scales that his mount never travelled and was pulled up.

Firstman takes the last for Martin and Coen

Firstman availed of a lovely seam down the inner to defy 10st 2lb in the second division of the Mary Rogers Memorial Handicap in Bellewstown.

Magellan Strait completed a short-priced double on the afternoon at Bellewstown for Mikey Sheehy and Joseph O’Brien after taking the featured Kilsaran Race.

Clifftop was a poignant winner of the first division of the Mary Rogers Memorial Handicap in Bellewstown in the hands of Siobhan Rutledge.

Lady Of The Vale gets her turn in Clonmel

Andrew Slattery's Lady Of The Vale (9/4jf) put her experience to good use in the concluding Clonmel Flat race over an extended two miles in the hands of Adam Ryan.