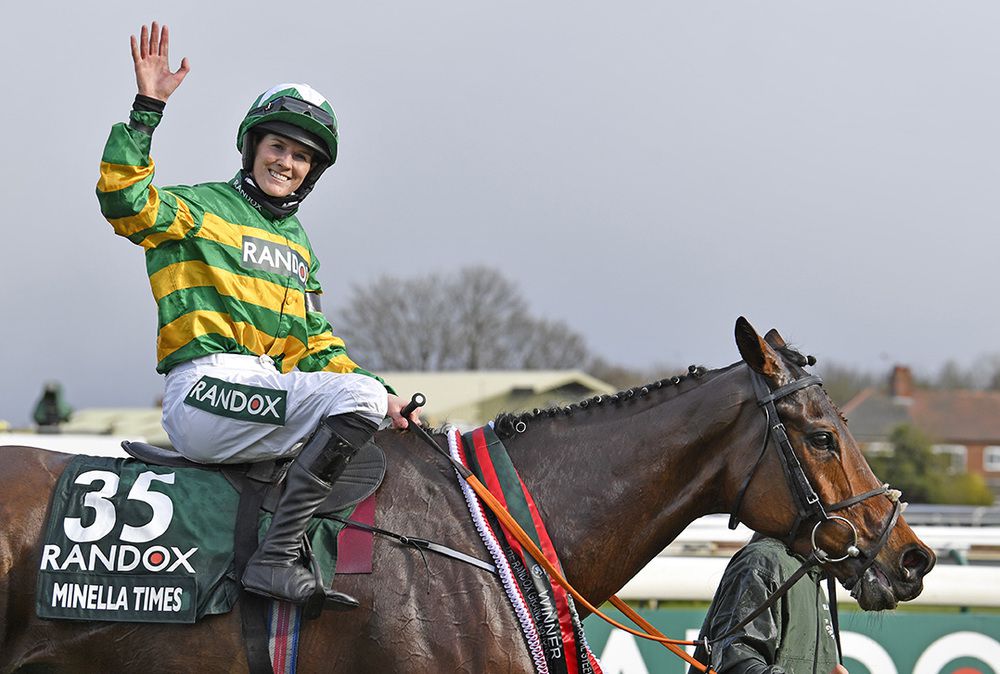 The Tipperary rider, 31, was top jockey at the Cheltenham Festival — where she won the Champion Hurdle — and crowned a fabulous season with an historic triumph in the world’s greatest steeplechase.

The writing was on the wall when she took Minella Times into the lead before the final fence, although she had to keep the Henry de Bromhead-trained eight-year-old up to his work as the famous Elbow approached.

Blackmore and Minella Times (11-1) were not for stopping, though, and galloped into racing folklore to win in the colours of JP McManus. Balko Des Flos (100-1), ridden by Aidan Coleman, was second to give De Bromhead an incredible one-two. Any Second Now (15-2) was third, with Burrows Saint (9-1) fourth and Farclas (16-1) fifth, as Irish-trained horses filled all those places.

An emotional Blackmore said: “This is the Aintree Grand National. I’m completely blown away.

“I got a fantastic passage the whole way. Minella Times was unbelievable, he jumped fantastic, I don’t think he missed a beat anywhere.

“He was able to travel into a gap, I seemed to have loads of space everywhere and you couldn’t have wished for a better passage. He was just unbelievable, he really was, his jumping was second to none.

“I’m so lucky to be riding these horses for Henry de Bromhead. He trained a one-two there which is incredible. That can’t be forgotten in the whole scheme of things.

“It’s great to win it in these colours, too. It’s always a privilege to ride for JP McManus and to win it for him is unbelievable. They’ve had a tough year so hopefully this can make things a little easier.

“This is a massive deal for me personally, not the fact I’m a female. The thing that hit me when I crossed the line was that I’d won the National, not that I’m the first female to win the National. I’m just delighted.

“I don’t feel male or female right now — I don’t even feel human. This is just unbelievable.”

“Balko Des Flos ran a cracker and Chris’s Dream was going very well, but unfortunately he unshipped Darragh O’Keeffe four out. They all ran really well.

“It looked like Rachael had the race won at the last, but we all know how that can change. Any Second Now looked a bit unlucky with his passage and he started to come back at us and obviously Balko was staying on as well.

“Rachael got a great passage all the way round, a lot of luck on her side and he winged fences for her. It was brilliant.

“She knows the horse very well. We were unfortunate during the winter when having a couple of great runs and just getting beaten, but this made up for it.

“We put National-type fences together last week and it seems to have helped, but he’s such a brilliant jumper anyway. He was so good all the way.”

He added: “I thought I was dreaming after Cheltenham so this is amazing, it’s incredible and Rachael was unbelievable. It’s incredible to do it for the McManus’ family and we got a clear run the whole way.

“Of course you dream of winning this, but it was a distant dream. Anyone in the jumping game wants to win it, so I’m just so fortunate.

“Rachael is brilliant and we’re so lucky to have her, I think they broke the mould with her, what can you say?

“It’s a good partnership, you can see from when she joined us how we’ve gone from strength to strength. She’s just a fantastic rider and a lovely person to work with.

“I’m back on the ferry tonight so that’s something to look forward to!”

There was a sad postcript to the race, with news that the McManus-owned The Long Mile who was pulled up, had suffered a fatal injury.

Bryony Frost, who was unseated from Yala Enki was taken to hospital for assessment.