Blairmayne gives his connections a big day out 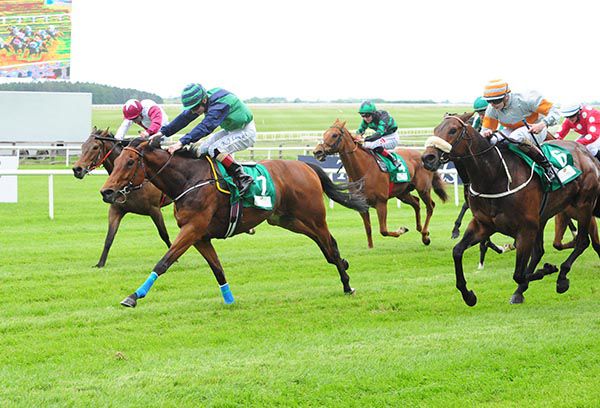 Eighth in the race last year Blairmayne (10/1) stepped up nicely on an encouraging comeback run at Naas on May 11th, to take the Heritage Hotel & Spa Handicap at the Curragh under Killian Leonard.

Leonard remarked: “Shane Foley rode this lad in this race last year. He wasn’t beaten all that far. He was probably a little bit far back so I was happy enough to send him forward.

“I was confident I’d hold on as I was looking up at the screen. He was getting a bit tired on me as six is as far as he wants to be going. It was a little bit worrying but he’s done it well.” Shore Step was the one for money here, halving in price from 8/1 into 4/1 favouritism. He could manage only seventh.

It was Arcanears and Fridtjof Nansen that gave Blairmayne most to do, but they failed by half a length and a head to get to the victor.

Blairmayne raced prominently, and he led soon after halfway. Ridden over a furlong out and keeping on well inside the final furlong, Natalia Lupini’s Blairmayne held on for the win.

“Killian gave him a brilliant ride. He was a bit unlucky last time at Naas as he got no run,” said Miss Lupini.

“We were hoping for a very good run today and we were pretty confident.

“He loves it here and he loved the ground today, it was good safe ground.

“The biggest aim for us would be to win a premier handicap here and we'll look at the Scurry and Bold Lad again for him. He was placed in both last year.

“He has proven he's competitive at that level so we'll keep trying.

“He always runs his best and always gives you a nice day out. He's just amazing and it's great to have him.

“It's amazing to win on a classic day and I have no words to describe the feeling. It's one of the biggest days and for a small yard like ours it makes all the hard work worth it. It's really brilliant.

“We're based in a little yard just outside Banbridge and have nine horses at the moment.

“We have few young horses that we're looking forward to running as they are shaping well.”