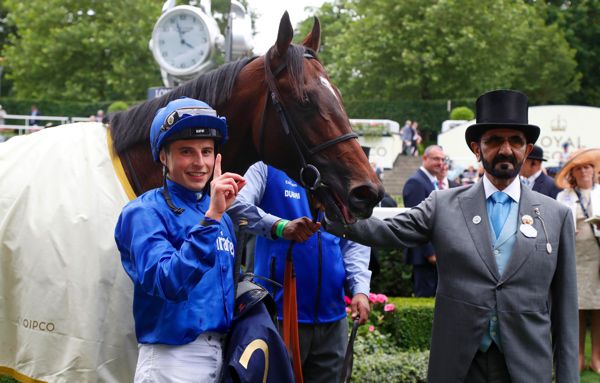 Blue Point warmed up for Dubai World Cup night with an impressive performance to win the Nad Al Sheba Turf Sprint at Meydan.

Godolphin’s top-class sprinter had hinted at better things to come when making a successful seasonal debut three weeks earlier, and disposed of this Group Three opposition with the minimum of fuss ahead of the Al Quoz Sprint at the end of the month.

Log Out Island set the early pace, but the race was as good as over once William Buick brought Blue Point to make his challenge on the stands side in the final quarter-mile.

The five-year-old entire, trained by Charlie Appleby, cruised into the lead a furlong and a half out and coasted across the line three lengths clear of Ekhtiyaar, with Mazzini third.

Blue Point was cut to 8-11 favourite from evens for the Al Quoz by Paddy Power, and to 4-6 by RaceBets.

Appleby said: “I’ve always had a soft spot for this horse ever since his two-year-old career. He’s one of the quickest horses I’ve ever had and he’s just progressively improved year on year.

“Mentally he’s more mature this year and physically he’s what you want to see in these sprinters.

“He came out of his last race so well I thought we’d be better off taking another race in to keep the lid on him. He’s was just too fresh.”

Divine Image, ridden by Brett Doyle, had taken the previous race, the Al Bastakiya, to spark a quick double for Godolphin and Appleby.

Assessing options for the filly, Appleby said: “We’ll take a look at the UAE Derby, but we also have in our minds a trip to Kentucky for the Kentucky Oaks.”

A treble was quick in coming, with Old Persian producing a devastating late burst to snatch victory close home in the Dubai City of Gold.

Buick had to bide his time on the four-year-old, who was having his first race since he finished fifth in the St Leger at Doncaster in September, but it proved no problem.

He gained on Racing History, trained by Saeed bin Suroor for Godolphin, stride by stride in the final furlong and got up close home to score by a short head.

Confirming the Sheema Classic as the plan, Appleby said: “There’s a little bit of improvement still there to come.”

Dream Castle got on top in the last half-furlong to complete a hat-trick of victories in the Group One Jebel Hatta.

Christophe Soumillon delivered the Bin Suroor-trained five-year-old with a well-timed run in the centre of the course to score by a length and a quarter.

Dream Castle had the Appleby-trained duo of Wootton and First Contact back in second and third place respectively.

Bin Suroor said: “Nine furlongs is a good trip for him. The plan now is to take him for the Dubai Turf.

“I think in the past we thought he was a sprinter, but I believe his trip is nine furlongs plus. He is a different horse, more relaxed and that gives him a chance to run well.”

Soumillon suffered a surprised reverse on Bin Suroor’s Thunder Snow in Round Three of the Al Maktoum Challenge.

Having his first race since finishing third in the Breeders’ Cup Classic in November, last year’s Dubai World Cup hero had to settle for second place.

Capezzano made all the running under Mickael Barzalona to take the Group One honours in the 10-furlong contest for trainer Salem Bin Ghadayer.

Turning into the straight, Thunder Snow looked to have every chance of reeling in the leader, but lack of race fitness told while Capezzano pulled away again in the straight to win by nine and a half lengths.

“The horse had a few blows and I could see Mickael was cruising in front,” said Soumillon.

“Today it was his first run since the Breeders’ Cup and he needed it for sure. If Saeed can get him to the World Cup like last year I wouldn’t be surprised too see him in the first two or three.”

Bin Suroor said: “He got tired, just like we said before the race. He will improve from the race and will be ready for World Cup night. He’ll be fine.”