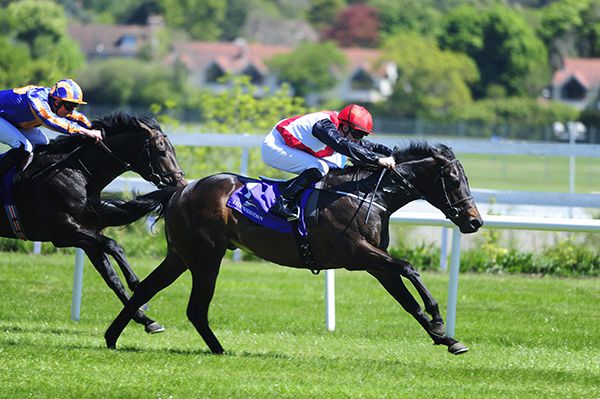 Brother Bear will bid to get back on track in the Group Three Jebel Ali Silver Jubilee Anglesey Stakes at the Curragh today.

After winning his maiden at Leopardstown in May, the son of Kodiac followed up in the Listed Marble Hill Stakes over the course and distance.

He was sent off favourite for the Coventry at Royal Ascot on his most recent start but had to settle for fourth there after drifting left inside the final furlong.

The bay colt faces five rivals now in this six-furlong contest, with the Jim Bolger-trained Theobald and Aidan O'Brien's Actress his main rivals.

The former won well on debut at Leopardstown, and it will be interesting to see how he copes with this step up in class.

The more experienced Actress was a good sixth in the Albany at Royal Ascot, going down by a neck on her most recent outing in a Listed contest over five furlongs at Tipperary.

The Tote Scurry Handicap is also over six furlongs, with 17 declared for this ultra-competitive contest.

Five UK raiders make the journey across the Irish Sea for the valuable prize, with Pat Smullen booked to ride Normandy Barriere for Nigel Tinkler.

This six-time winner was ninth in the Wokingham at Royal Ascot on his last start and is sure to have plenty of supporters.

The Boodles Ladies Derby Handicap is another competitive affair. Zeftan who won this race in 2014 and 2016, showed his well-being by winning the Apprentice Derby last month, finishing third on his most recent effort over a mile and two. Miles To Memphis Sandstorming and New Direction have all won recently, and confidence is likely to be high with connections of these three. Have A Nice Day is another returning winner, as he takes his chance in the K Club Handicap.

The seven-year-old gelding has won this race for the last two years and will bid to complete the hat-trick, with David Simmonson taking a valuable 5lb off. Medal Of Honour who was placed on his last two starts, might be able to get off the mark in the opening Club Godolphin Irish EBF Maiden, while Air Supremacy looks the one to beat in the concluding Heffernan Tyres Maiden.