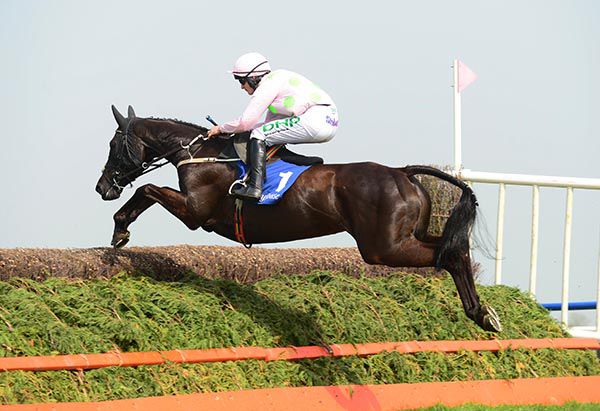 Camelia De Cotte made it six wins over fences when making all in the Grade Three mares' chase at Fairyhouse.

She raced clear throughout for Paul Townend before stablemate Pravalaguna closed at the fourth last. Barra soon joined in the action as Camelia De Cotte popped the third last.

Camelia De Cotte jumped left at the second last but soon had her two rivals hard at work in behind as she set sail for home.

The well backed 13/8 favourite raced a few lengths clear and, once she negotiated the last, kept on for a five and a half length victory. All six of her victories over fences have come with Townend in the saddle.

Pravalaguna was untidy at the last and could make no inroads in coming home second at 2/1.

Paul Townend said: "I suppose going chasing brought about improvement in her. She took to fences so well. There's a great programme for them and she was well placed.

"I thought it would be hard giving her (Pravalaguna) weight but there wasn't a whole lot in it. It could have gone either way - I thought Ruby (Walsh) might have a trick or two up his sleeve but luckily enough we had the horse underneath us.

"She would probably be entitled to (go to Punchestown), she is hard on herself is the only thing. We'll see how she comes out of it."

Willie Mullins said: “She's very sharp. You saw more than I did as I just arrived here when they were pulling up.

“Paul thought she was going a little right today, I don't know why. He said the ground was well watered and it's a credit to Fairyhouse to produce ground in weather like this.”

On the Grand National he said: “We had a good night. Rich (Ricci) is tied up at the minute and we said after today we'd have a round-up of the whole meeting.

“I know he enjoys those type of win, who wouldn't with that kind of prize-money.

“All the horses have come out fine, a couple with little bits of problems but you'd get that after any race meeting.

“No major problems. Pairofbrowneyes was fine this morning, C'est Jersey was a little sore around a joint. There are the two major ones that got falls yesterday but I think they'll be fine and they might even run again next week in Punchestown. They fell early enough.

“Katie O'Farrell was fine too as was Paul Townend.

“Burrows Saint was fine and came out of the race well. I'm very pleased with how the horses are coming out of their races.

“I'm delighted with the form of the horses and hopefully we can maintain the same form for Punchestown but you never know.