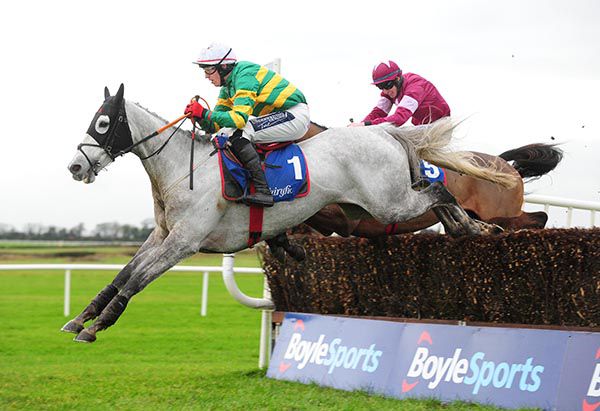 Campeador will try to press his Arkle claims in the Irish Stallion Farms EBF Novice Chase at Naas today.

Gordon Elliott’s charge is ranked among the lively outsiders for the Cheltenham feature at this stage after winning one of his two starts over fences to date.

Grade One-placed over hurdles, he crashed out at the second fence on his chasing bow before righting the record with an odds-on victory on his most recent start.

He faces just two rivals in this two-mile heat with Terence O’Brien’s Articulum appearing the only serious challenger and Muroor a long-shot for glory. Barrington Court is among the leading lights in the I.N.H. Stallion Owners EBF Maiden Hurdle.

A Listed bumper winner for Jessica Harrington earlier in the campaign, the five-year-old had to settle for third behind Cheltenham Festival victor Relegate last time out.

Relegate’s fellow Willie Mullins’ inmate Queens Boulevard finished sixth in that Listed event and will try to reverse that form over obstacles this time. Quamino came unstuck on St Stephen’s Day but will try to make amends in the Eastcoast Seafood & Gouldings Hardware Handicap Chase.

He had previously been in good form for Paul Nolan but possibly faces a tough task against the likes of Punches Cross and Arvico Bleu Missy Tata returns from 739 days off the track in the Irish Stallion Farms EBF Mares Beginners Chase.

She won five hurdles on the bounce for Elliott between April 2016 and December of that year but has been off the track since then.