Carrie gets the job done on debut over flights 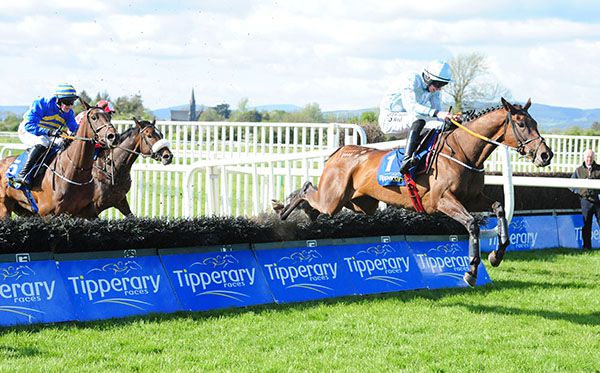 Carrie Des Champs made the perfect start to her career over flights, as she took the opener at Tipperary, the Hotel Minella Mares Maiden Hurdle.

A winner of three bumpers last year, the Gordon Elliott trained five-year-old was last seen finishing third in a Listed mares bumper at Gowran in October.

Sent off the even money favourite this evening (having opened at 8/11 on-course), the Kenny Alexander owned and bred bay was never far off the pace.

She improved to lead after three out and despite awkward jumps at the last two, she kept on well for pressure from the final flight, going on to score by a length and three parts. Blue Heather (20/1) kept on well to take second under Jonathan Moore for Gavin Cromwell, while the well-backed Robin Des Sivola (14s this morning and from 7s to 9/2 on-course) was a nose away in third.

Jack Kennedy was aboard the winner, and he said in the aftermath: "She picked up when the others came to her and she has a good attitude.

"She was a little bit novicey but you'd expect that on her first hurdles run and she should get better.

"She is a nice mare and she is probably a summer mare but I don't what Gordon's plans are for her. She is one to look forward to anyway."