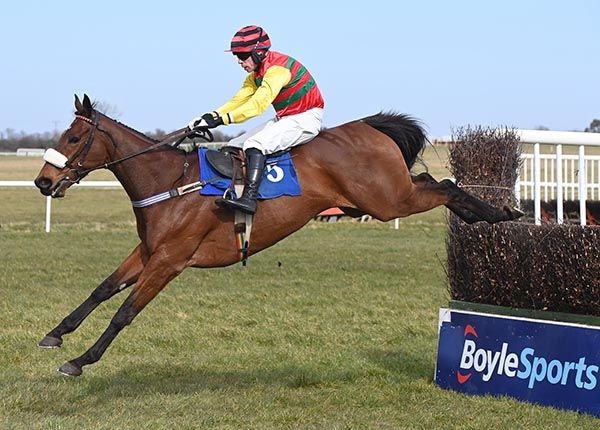 The seven-year-old had been in tremendous form earlier in the year but disappointed on his most recent start when pulled up in at Ballinrobe.

“I’m looking forward to him getting started unless it gets heavy and with the rain that’s given now, it won’t get heavy. He goes fine on soft ground,” Casey said on Friday morning.

“He did very well out and is in great order. He’s done a few bits of work and I’m very happy with him but I’m sure he’ll take the run. He looks a better horse than last year but he probably isn’t as fit yet. I’m thrilled with him though.

“The Mayo National didn’t work out at all for him. The first time he jumped off fine, the second time he was jumping off last and he never seen the first fence and went straight into it and Jack (Kennedy) ended up pulling him up.”

With nothing set in stone beyond this weekend, Casey is keeping options open with regard to where the gelding will run next.

“The intention was to go to the Munster National but if he runs well in this, we’ll stay the graded route where there’ll be smaller fields. He was always the same, he likes to get into a rhythm and he’s been the same in big handicaps, even over hurdles. Things go wrong and that’s it. In smaller fields he can get into a rhythm and tends to get better as he goes along.

“I have no worries about his jumping. When he won in Killarney, before Jack got off him, he said, ‘This is the best horse I’ve ever seen to jump.’ I says, ‘Sure you rode a Gold Cup winner!’ ‘I don’t care,’ he says.

‘He’s the best horse I’ve ever seen to jump,’ and then he ploughed into the first in Ballinrobe! But when he gets into a rhythm, he’s a good jumper.

“I’ll know more after Sunday but I’m very happy with him as long as the ground doesn’t go heavy.”