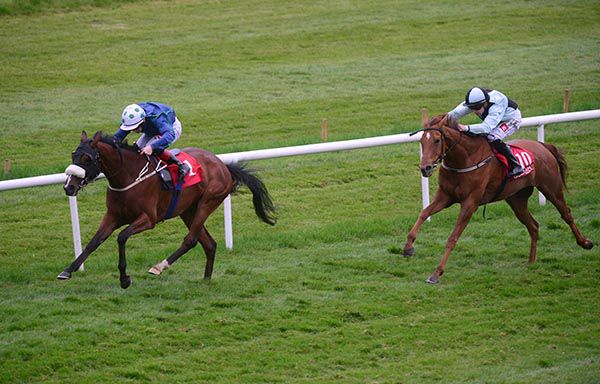 The pair had earlier won the mile handicap with Tony The Gent and completed their double with My Mystique for owner/breeder, ex-trainer Homer Scott, who also stands winning stallion Rajj.

Following the race Lyons commented “I'm delighted for Homer as she has only done there what she's been promising to do at home for ages.

“She's been more than disappointing in the last 24 months and she's dropped down to the lowest mark that we were prepared to give her. If she didn't perform tonight she was finished.

“Colin wanted blinkers and with the blinkers on and motor-biking her round on the track, everything fell into place.

“It's no more than she's capable of and she's probably capable of a lot more. Whether we persevere now with her, we'll see.

“She's from a good old family with My Laureate bouncing back to form, Insayshable over in Hong Kong, and Ainippe previously.

“It's a family worth having for the shed but whether we persevere after that one we'll decide later on because I don't think she's in love with it.”

The wins move Keane, Champion Jockey of 2017, ten clear (33-23) of nearest pursuer Donnacha O'Brien at the head of this year's Championship, which has yet to reach the half-way point.