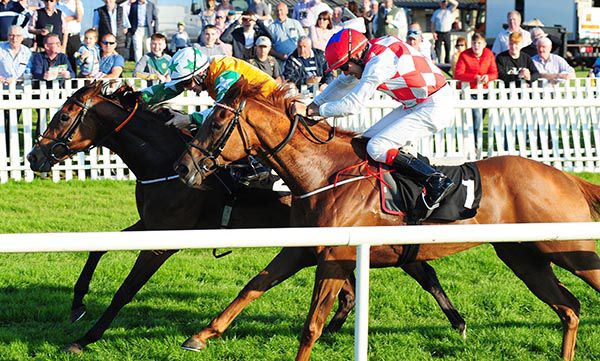 Jockeys Championship leader Colin Keane registered his 48th win of the campaign when steering Highly Approved to win the Tote Handicap (div I) at Bellewstown today.

The four year old daughter of Approve was the well backed 11/4 favourite (from 4/1 on track) and in the race raced prominently before seeing off the challenge of Takeachancejimmy close home for a neck win.

Following the race winning trainer Ado McGuinness said “we weren’t going to come here as we thought the track wouldn’t suit her, and she’s going to Roscommon on Monday for a fillies handicap.

“The ground is the key to her as she needs fast ground. She’d slipped down the ratings a bit but had come back into form. Hopefully he won’t be too hard on her, and she might go for a 0-75 in Galway as well.

“She belongs to Dermot Forde, who is a vet in Oldcastle, and his son (Sean).”

Winning rider Keane is now 10 winners clear of Donnacha O'Brien (48-38) at the head of the Jockeys' Championship.