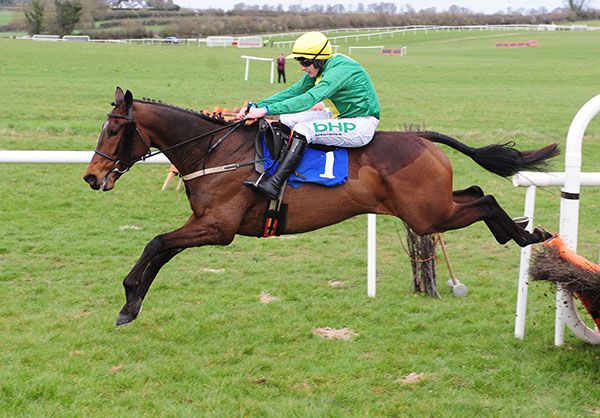 Paul Townend moved on to the 99 winner mark for the campaign, 15 ahead of Rachael Blackmore, the former champion guiding Scarpeta (evens) home for his boss Willie Mullins in the Enjoy White Gypsy At Finns Borrisoleigh Hurdle at Thurles.

With cheek-pieces on for the second time, the French-bred son of Soldier Of Fortune showed no ill-effects of his 14th place effort in the Coral Cup at Cheltenham 10 days ago.

Second market choice Peregrine Run (2/1 - 9/4 - 7/4) got closest to Scarpeta, but in truth it was pretty comfortable for the Mullins runner in the end as he crossed the line two and three parts of a length to the good.

Peregrine Run is a Topham Chase entrant, whilst third home Sandymount Duke is in the English and Irish Nationals.

"It's not often we go to Cheltenham to school one for Thurles but that's what happened here. He jumped way better today and going a slower speed against lesser opposition gave him great confidence," said Mullins.

"We'll look for something similar at Fairyhouse or Punchestown but if a race like this comes up down the country we'll take that as well. He was disappointing on the flat for us last year but this year might be different. We'll find races for him and he can go on good ground."

John J Fitzpatrick, rider of Static Jack trained by Miss Ellmarie Holden, reported to the Clerk of Scales that his mount hung left throughout.