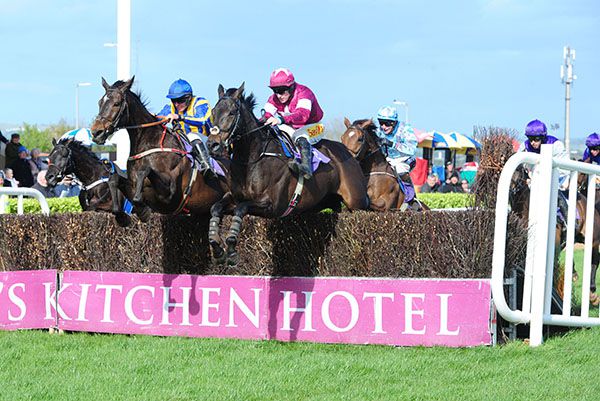 The easy to back Commandant led home a 1, 2 for Joseph O'Brien in the Freddie Doyle Memorial & Liz Doyle Racing Beginners Chase.

Successful over flights at Thurles in November, the son of Presenting, failed to complete on three of his next five starts, but was carried out on his most recent outing at Clonmel.

Having opened on-course at 4/1 this afternoon, the bay six-year-old eventually went off a 13/2 chance under Sean Flanagan.

After racing mainly in second, he jumped into a share of the lead at the fourth last, and was ridden to the front after two out. Song Of The Sky who didn't have the clearest passage from the last, then threw down a strong challenge on the run-in, but the line came just in time for Commandant, as he prevailed by a short head.

The runner-up was returned at 8/1 (from 10s) under JJ Slevin, while 33/1 chance Overbury Prince was another length and three parts back in third. Bothar Dubh was sent off the well-backed 13/8 favourite (from 9/4), but made a mistake at the first and unseated Mikey Sweeney.

Flanagan said afterwards: "I got there too son. Luke Dempsey's one (Indian Music) made a mistake at the fourth last and I kind of just landed in front.

"He travelled well enough into the straight and put in a really good jump at the last. I thought I was going well enough to the line but then JJ came at me. He was probably idling a bit in front."