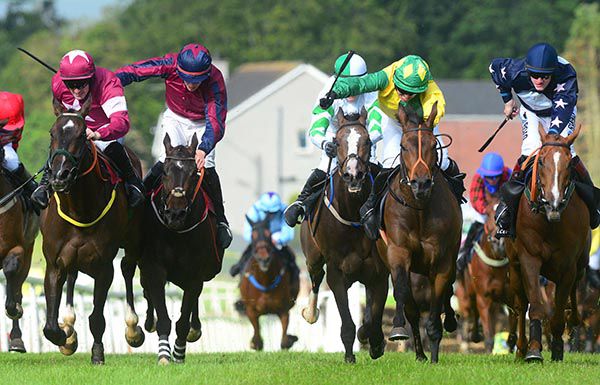 Convara, yellow and green, gets up under Darragh O'Keefe
© Photo Healy Racing

Convara served up a 25/1 surprise in the extended two mile maiden hurdle.

The five-year-old gelding was last seen finishing third in a maiden hurdle at Thurles in November.

In today's assignment, he finished best on the run-in to grab the lead close home.

Trainer Andrew Slattery said: "He (Darragh O'Keefe) started off pony racing with my young lad. We bought a pony off him for Andrew and that's how we met him. He's a good, young lad.

"I thought he would need the run today, I hadn't him away anywhere. I thought that for this time of year it was a better than average maiden hurdle - there was a few with chances.

"We had a good bit of work done with him but I just thought he might need it. He has improved from last year.

"He's a grand horse and he surprised me there now. I think I'm after having five or six seconds in the last three weeks and one has come out the right side of the line.

"I was a bit afraid as I thought the ground might be a bit slow for him, he's a real fast-ground horse.

"I had him in the two and a half mile handicap hurdle but I ran him in this in case he didn't get the trip and had a hard race."

The Stewards interviewed L. Quinlan, rider of Dedanann, concerning his use of the whip in the latter stages of this race. Evidence was heard from the rider concerned. Having viewed a recording of the race and considered the evidence the Stewards were of the opinion that L. Quinlan was in breach of R10(3)(g) by using his whip with excessive frequency and R10(3)(i) by failing to allow his mount at least three strides to respond to the whip. Having taken his previous record into consideration, the Stewards suspended L. Quinlan for three race days.