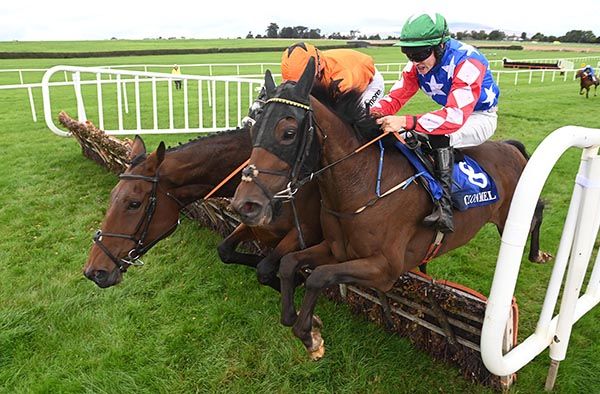 Corkbeg, near side, puts in a good jump at the last
© Photo Healy Racing

The five-year-old gelding, in the first-time combination of a hood and tongue-strap, made headway rounding the straight and was switched out to make a challenge. In doing so, he gave Hollys Honour a bump.

O'Sullivan soon sent him after Hockworthy Flyer who drifted to her left in front of him two out. Corkbeg clipped the top bar but didn't lose momentum as it got a bit tight for him down the stands' side rail alongside the narrow leader.

He jumped into the lead with a bold leap at the last and was driven out to score by a length and three quarters from Londonofficecallin (10/1) who put in a late effort in second. Hockworthy Flyer (4/1jf) dropped half a length back in third.

Trainer David Harry Kelly said: "We gave him a couple of runs and he was a bit novicey, and this, that and the other. We thought he’d run a bit better in handicaps up to now, and I was disappointed with him the last day, but in fairness to Denis (O’Regan), he gave him a grand ride and learned in Tramore.

"We were wondering if we would stop or if we would keep going, and that’s why we were surprised about the money coming for him. He has worked well in the past and, in fairness, he was always going to be a stronger horse next year.

"We’re lucky with the way the race panned out and he’s owned by a pure gent in Jim Reaney, who also bred him. He’s a very loyal owner and is one of these lads who takes the bad news with the good news.”

The Stewards requested a report from David Harry Kelly, trainer, as to the apparent improvement in form of Corkbeg, placed first, as compared with its recent run at Kilbeggan on the 2nd September when pulled up. The trainer reported that his charge got very upset on the long walk from the stables to the saddling stalls at Kilbeggan. Today his charge settled well from the time she arrived at the racecourse. A hood and tongue strap were applied and she relaxed well during this race and her breathing was good. He also felt that the shorter distance of todays race was more suitable. Having considered the evidence the Stewards noted the content of the report.