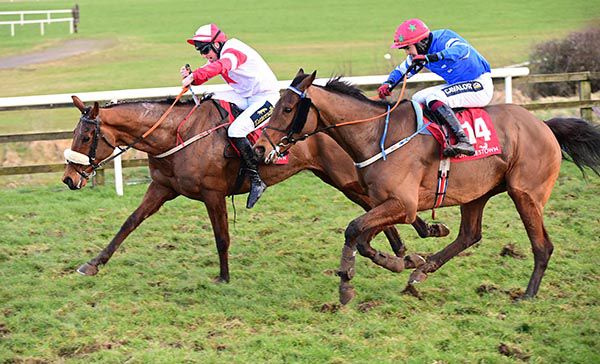 Following an eventful weekend of racing, when State Man thrust himself into the Champion Hurdle picture on Sunday, winning the Grade 1 Morgiana Hurdle and receiving a quote of around 5-1 with QuinnBet for the showpiece in March, there is a host of betting opportunities up for grabs this week - none more so than in the Troytown Handicap Chase at Navan on Sunday.

The Troytown, which often throws up Grand National clues, is one for the punters thanks to its ultra-competitive nature.

QuinnBet has come up with a cracking welcome offer for new Irish customers in time for the three-mile slog on Sunday allowing you to claim €60 in free bets.

The Big Dog is likely to be prominent in the market following his victory in the Muster National at Limerick on his seasonal comeback. His trainer Peter Fahey revealed after the win that the Troytown is one of his major targets this season:

“He will tip away and will aim for the Troytown and other staying chases and if he ended up being an Aintree horse I'd be delighted.”

“In the Troytown he'll be up near the top of the weights. It looks a competitive race and hopefully he can turn up on the day and run a huge race.

“This year we were adamant to try and get him forward for races good and early in the season.

“He'll improve away, he's very unexposed and he's lightly raced. I think the weight isn't a problem for him.”

Old favourites Death Duty and younger stablemate Farclas, who finished second in the Troytown last year are among 8 of the entries for trainer Gordon Elliott who has won 3 of the last 6 runnings of this race.

Over in the UK, where racing fans are up in arms regarding small field sizes, the Coral Gold Cup will undoubtedly ease some of that angst with a potentially decent turnout. Cheltenham Festival winner Corach Rambler is current favourite and trainer Lucinda Russell is confident he is a better horse this year. The Grade 1 Fighting Fifth Hurdle at Newcastle, where Epatante and Constitution Hill make their much-anticipated seasonal debuts are also highlights of the weekend - providing plenty of options to use your QuinnBet free bets.