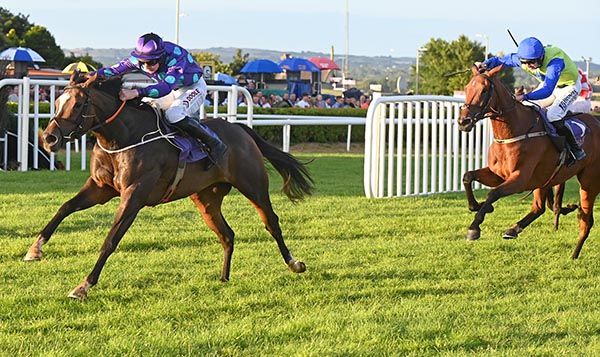 Lodilomoco had a lovely debut run when fourth in a hot race at Punchestown and built on that to land the mares’ bumper at odds of 7/2.

Willie Mullins’ newcomer Dina Leen (4/9 fav) was all the rage to win at the first time of asking but she couldn’t go with the winner in the straight and finished fifth.

Tom Harney had asked the Arcadio filly to pick up from mid-division on the approach to the home turn and she swept around the outside of the field to lead under two furlongs out. From there she kept up the gallop to score by two and a quarter lengths and a head from Russellsbelle and Glen Na Tara

Winning trainer Denis Cullen said: "She had the form in the book coming into this race. The only concern I had was that Punchestown is a very different track to Wexford and whether the sharper track would suit her. She is a handy filly and is progressive and hopefully the boys will have a bit of fun with her.

"It's special to me because Lorcan Higgins is a good friend of mine for many years and it's his first winner on the track. I rode plenty of horses for him and probably got them beat! He is a local man so it's great for him to have a winner here. Young Lorcan is getting married next Friday so this is a nice early present.

"I had an entry made for her at Roscommon but the boys said there was a mares' bumper here and it actually suited better because I needed to get another gallop into her. Time wise it worked out perfect for me.

"I'll have a chat with the lads now and see where she will go next. She has schooled over hurdles and jumps great. There is a winners' bumper at Down Royal on the 26th and it is an option. We will mind her anyway.

"Her half-sister goes fairly well on soft ground so I'd imagine she is versatile enough as long as it's not extremes, heavy or firm."

Marshman gets green light for Gimcrack

Marshman is set for a quick reappearance in the Al Basti Equiworld Dubai Gimcrack Stakes at York following his impressive win at Thirsk on Friday night, with an ambitious plan being hatched to make the talented youngster champion two-year-old.

Cathal Landers conjured up a strong finish from Influential Lady to land the extended 2m5f mares' beginners' chase at Tramore.

Inspiral and Frankie Dettori bounced back to winning ways with a fine performance in the Prix Jacques le Marois at Deauville.

Golden Sandbanks made a winning foray into handicap chase company at Tramore.