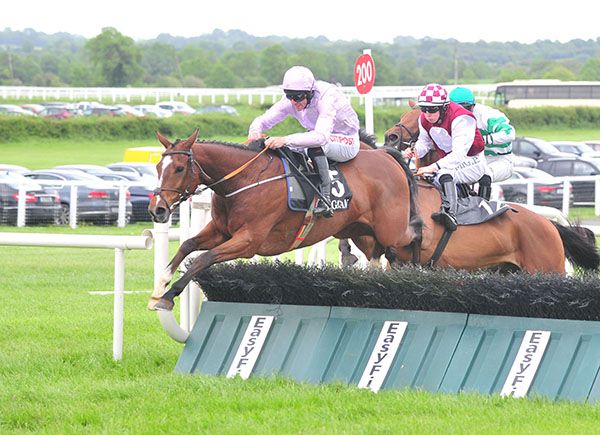 Andy McNamara is looking forward to a good summer with his Athboy yard, and was again in the winners’ enclosure after Dasmyhoss landed the Midlands National & Ladies Day Friday 19th July Handicap Hurdle at Kilbeggan.

The well-backed 4/1 joint favourite (from 11/2 on track) was produced to challenge approaching the last by Davy Russell, and asserted on the run-in to score by three and a quarter lengths. Wooster could find no extra on the run-in in second, while Pivotal Flame kept on to finish a further length and a half away in third.

McNamara said, “He’s a lovely horse and Robbie bought him for the owners and won a bumper with him in Tramore. He was just behind Le Richebourg on his first run in a bumper but they have gone slightly separate ways since!

“He’s a lovely horse and hopefully there will be another one of those in him. He’ll jump a fence and also finished second at the Curragh last year so there are plenty of options for him.

“He likes a bit of nice ground so we’ll keep kicking on with him.”

McNamara, who also landed a handicap hurdle at Ballinrobe on Monday with Zoffalee, added, “We didn’t have many to run over the winter but we have a few like him to run over the summer.”