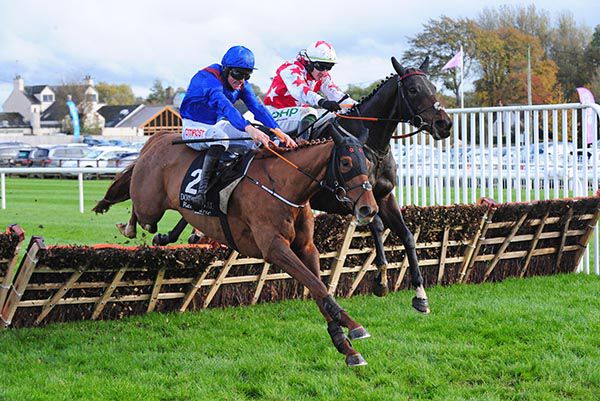 1/3 favourite Daylight Katie looked in trouble after making a bad mistake three out in the Lough Construction Ltd. Irish EBF Mares’ Novice Hurdle, as Jeremys Flame (6/1) loomed up on her outside looking to capitalise on he rival’s error.

The pair had a good tussle to the line but, to her credit, the market leader kept pulling out what was required to score by a length and a quarter, with the first two way clear of the remainder, with Penny Out (16/1) twenty-eight lengths further away in third.

The winning French-bred, a daughter of Bonbon Rose, was making it two from two over hurdles, having shown very good form in mares’ bumpers last season.

"We got a bit of a fright, said winning trainer Gordon Elliott, but she was brave to come back and win after what she did early on in the race.

"At the third last she stopped to a standstill and she definitely lost three or four lengths. To be fair, if she had winged that she probably wouldn't have come off the bridle - he could have sat on her and filled her.

"That's jump racing, you have to jump it and she didn't jump it. Thankfully she is okay.

"She'll go for all those mares' races now."