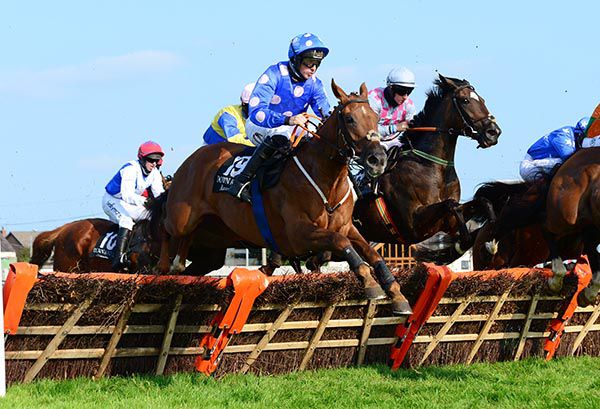 Third-reserve Dazzling Darren made the most of his opportunity in the extended two mile handicap hurdle for horses rated 80-109 in Down Royal.

The 9/2 shot came home well to collar Kitty Galore (9/2) on the run-in after the latter had made a bold bid from the front.

The winner kept on well to take the spoils by three and a quarter lengths from the runner-up. Go Gill Go (12/1) was another three and a half lengths back in third at 12/1.

Jockey Conor Maxwell said: "It was nice to come in for it and thankfully Gavin (Cromwell) put me up on him. I had a bit of form with him before, we were placed a few times on the Flat.

"I had to really roust him along to get there and he got there well enough. He's tough. He won in Galway and on his run in Galway he was entitled to win that.

"It has taken him a long time to get the hang of hurdles; he jumps well so hopefully that might just turn the corner. He jumped super and loved the ground. Maybe he is back in form after a bit of confidence on the flat in Galway.

"The race worked out well as they went very hard and he stays going."

This was the four-year-old geldings breakthrough victory over hurdles to go with five on the flat.