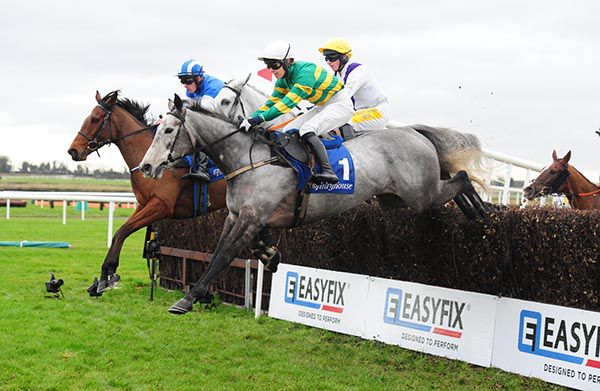 Demi Plie (10/1) doubled in price from morning quotes of 4/1 and 9/2 but belied her market weakness with a convincing win in the Irish Stallion Farms EBF Mares’ Handicap Chase.

The Flat-bred six year old, by Mastercraftsman out of an Oasis Dream mare, was always close to the pace and jumped soundly for Aine O’Connor.

She asserted from the second last fence where the disputing Ask Heather fell and Isle Of Destiny was hampered and unseated rider.

The 7/4 favourite Moskovite tried to make a race of it down to the last, but she had run in snatches a bit and could find no more as Demi Plie ran on to win readily by four lengths, with Mrs Lovett (10/1) another four and three quarter lengths back in third.

The winner scored twice over hurdles last year, but has really improved over fences with her record now standing at three from six, having won on better ground at Downpatrick in June and Listowel in September.

“That’s a nice pot to get with her and from day one jumping was her game, said winning trainer Padraig Roche.

“She is not bred for it but she’s taken to fences really well and Aine gave her a great ride.

“We’ll keep her to mares’ races and see if we can get a bit of black type with her. I’d say she will be in foal next year.”