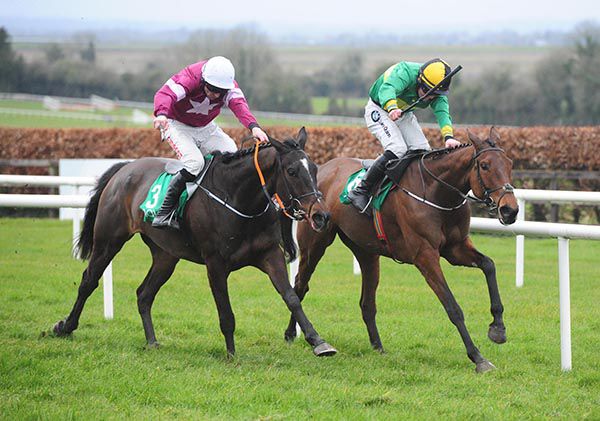 The sole mare in the two-mile-six contest bounced out in front under Luke Dempsey and was asked for an effort after the third last flight.

Fellow 2/1 joint-favourite Milan Native threw down his challenge two out but the mare kept finding more in front.

She stuck on gamely on the run-in to secure a half length success, in the colours of William Flood, following up on her maiden hurdle win at the track 16 days ago.

Philip Dempsey said afterwards:- “She’s tough out and did it the hard way from the front. They were rated to finish close enough and they did.

“I’d say she will run again with the ground the way it is. We’ll find something, maybe a winners of two or something like that.

“Derrinross ran well (in the Albert Bartlett). The good ones quickened away from him but he got a bit of prize money and came home well which is great.

“He’ll probably have one more run and then go chasing if it stayed soft early in the new season.

“He jumped brilliant — he never jumped as well.”