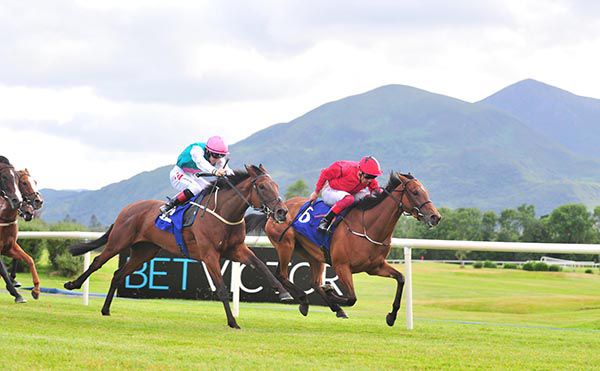 Dettori's first ride Time Tunnel was touched off by newcomer Tauran Shaman in the second race before he finished fourth on Mujid half an hour later.

On his third ride, Dettori looked to have judged things to a nicety on front-running Lady Wannabe in the feature and looked very likely to succeed inside the final furlong. However the 6/1 chance was agonisingly pegged back close home by Viadera (5/2f), who edged ahead in the last strides for an short-head win for wily former Champion Keane.

Winning trainer Ger Lyons was absent and was represented by his brother and assistant Shane Lyons who said “we were very nervous coming down with the weather forecast but the lads got it spot on and the ground is beautiful and good. She loves good or better, the trip but her heart won it today.

“She had a tough campaign in the last month or so and that was a negative coming into this but she fought like a lion. This was the main aim to win this and I'm delighted.

“With a heart like that, it will help her when we step her up in trip as well and we'll find it (a plan) as we go.”

Frankie Dettori's final ride of an eventful evening, Finding Nero could only manage fourth in the 8.30pm handicap.