Diamond Hill another for the Mee family at Galway 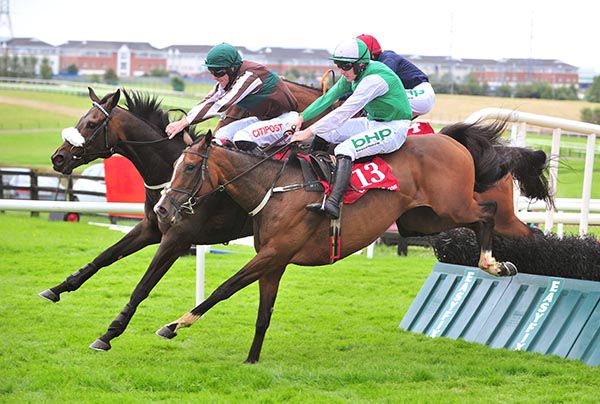 DIAMOND HILL (near side) and Paul Townend join issue at the last before winning at Galway.
© Photo Healy Racing

Day three of the festival, and a third winner already for owners the Mee family as Paul Townend produced Diamond Hill (9/4) at the last to take the opening Tote Supporting Irish Racing Since 1930 Maiden Hurdle.

She ran on to defeat the always prominent Days Without End (7/2) by one and-a-quarter lengths, with Sky Marshal a fast-finishing third, just another half-a-length away, at 8/1.

The 11/10 favourite Dancing On My Own wasn’t that fluent in front, and faded from the last to finish fourth.

The winner won on the Flat at the Festival last year, and was getting off the mark on her fifth start over flights.

Winning trainer Willie Mullins said: “She was very green and very novicey, and sometimes when they haven’t run over hurdles for six months or a year something clicks. She was still very green today and pulls very hard.

“I was amazed with her turn of foot from the last bend to the last hurdle.

"I thought coming around the last bend she might be third jumping the last hurdle and stay on but she was half a length in front.

“She took off in front so that just shows the Flat speed she has but I don’t think she jumps well enough to bring her back to two miles. She will have to come back to two miles at some stage because she’s too keen.”