Diva does the business in Down Royal opener 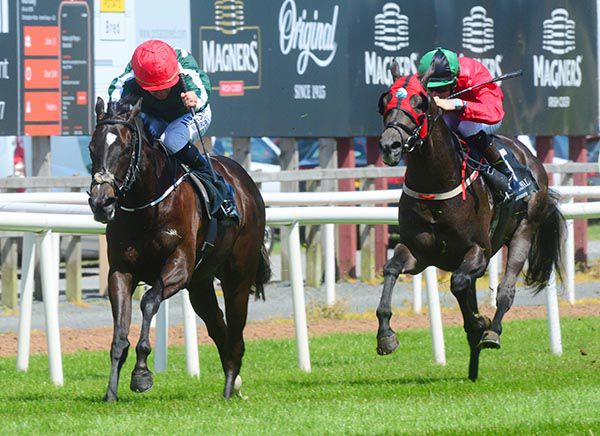 Invincible Diva justified her short price in straight-forward fashion in the opening Rainbow Communication Maiden at Down Royal this afternoon.

Shane Foley bounced the 9/10 shot out in front in the five furlong contest and she made the best of her way home.

The Jessica Harrington-trained daughter of Invincible Spirit was asked to quicken a furlong-and-a-half from home and kept on well when popped the question.

She was always holding St George's Head inside the final furlong to record a length-and-three-quarters success.

The winner had narrowly missed out on her debut at Cork last month when beaten by Mount Fuji.

Harrington said: "She had a great run first time and she did that well. Shane said she tries her heart out.

"The ground was probably a little bit slow for her but I had to take that chance. She was always in control and is a speedy filly.

"I hope so (that she is Stakes class). If the ground was good there's a five-furlong Stakes race in Tipperary coming up and she would love to hop off the quick ground.

"Look she has won now and that is the main thing.

"Jon Kelly (owner) is based in California - he had Beautiful Morning with me last year and Pincheck with me. This year we have Pincheck back, he went to America and came back.

"He has six two-year-olds with me this year and we have had two winners and a second so far. He has got some nice ones."