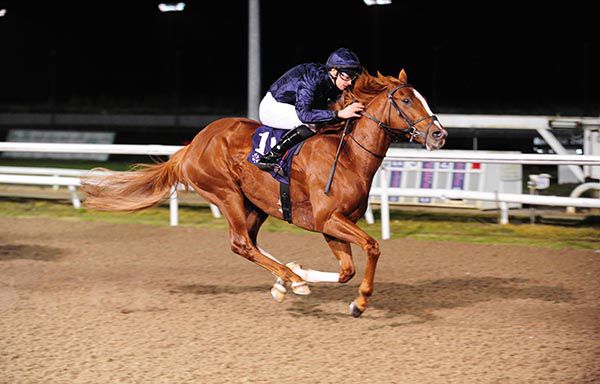 Vatican City completed a double for Aidan and Donnacha O'Brien, as he ran out a comfortable winner of the Irish Stallion Farms EBF Maiden.

Fifth on debut at Newmarket earlier this month, the son of Galileo, who is a full-brother to Gleneagles and Happily, was expected to deliver this evening and was sent off the clear 1/2 favourite.

Prominent throughout on the outer, the chestnut victor travelled best from early in the straight and cruised to the front from the furlong pole, going on to score easily by two and a half lengths. Psyche (8/1) finished second under Tom Madden for Jessica Harrington, while newcomer Abeona (14/1) kept on well to take third, another nose away with Colin Keane aboard for Ger Lyons.

"I sat on him for the first time last week, I didn't know a lot about him, and he gave me a beautiful feel there today, I really liked him," said Donnacha O'Brien, who was earlier successful on Yale

"We were going slow and I didn't think there was any point tucking in behind one just for the sake of one horse and a bit of cover.

"He travelled really smooth the whole way but he's still raw. He changed his legs behind before he does in front, which is not ideal, but I'm sure once he learns he'll be a lot better.

"You can never tell (how good they will be). Anyone that tells you that they know straight away is a complete liar.

"He gave me a really nice feel today, he's by Galileo so you'd imagine he should progress next year. I think he's a smart horse but I can't tell you how good he's going to be.

"Some of the horses that handle nice quick ground you get to this time of year and there's nowhere to go except Dundalk so it's a good facility for that and Dad doesn't mind running a good one."

At the request of the Stewards, P.B. Beggy, rider of Flying Scotsman, trained by A.P.O'Brien, reported to the Stewards' Secretaries that his mount is a raw horse which ran green and didn't quicken in a steadily run race which turned into a sprint in the straight.