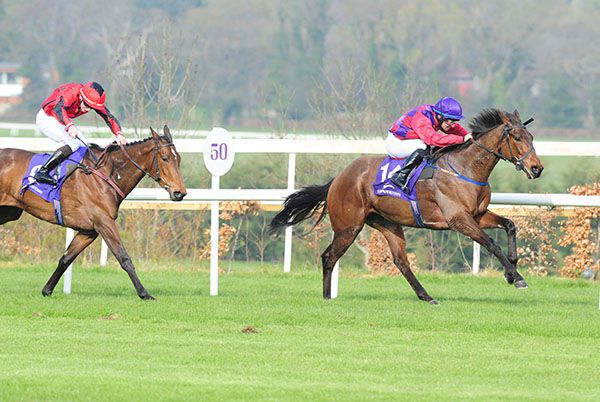 Rory Cleary rode this 7/1 shot and he disputed the lead early.

Soon racing behind the leader in second the Bushranger gelding was pushed along to lead under three furlongs out.

Ridden clear two furlongs out, Dont Quit kept on well under pressure inside the final furlong, and though with a reduced lead near the finish, the six-year-old held Rince Deireanach by a length and a half.

"He wants a bit of cut in the ground and he's been a consistent horse. He's always knocking on the door so he's deserved his win," said Gorman.

"He's a tough horse and all he wants is that little bit of cut in the ground.

"He's tough and courageous - he gives it his all every time he runs. They are the kind of horses you want to train."

The Stewards informed Denis Gerard Hogan, trainer that Make A Challenge would have to be recertified before being declared to run from stalls again.

The Stewards informed Denis Gerard Hogan, trainer of Make A Challenge, that a repeat of this horse's behaviour may render the horse liable to suspension in the future.

The Irish Horseracing Regulatory Board Veterinary Officer examined Heir Of Excitement, trained by Joseph Patrick O'Brien, at the request of the Stewards and reported the animal to be post race normal.