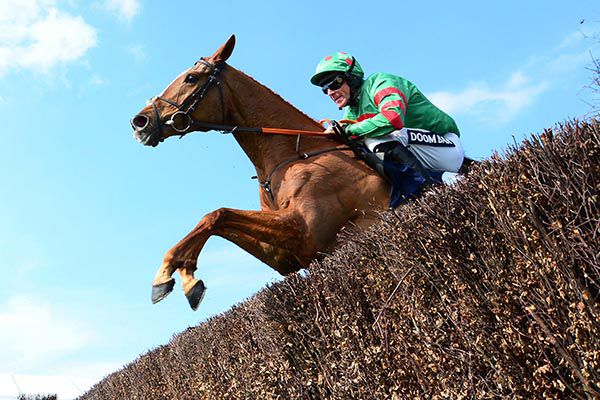 Ornua got his season back on track with a dominant front-running display in the Doom Bar Maghull Novices’ Chase at Aintree.

He was in front when falling at the sixth fence in the Arkle Trophy at Cheltenham last month and was the 3-1 joint-favourite to bounce back along with Arkle runner-up and fellow Irish challenger Us And Them.

Riding Ornua for the first time over fences, Davy Russell sent his mount straight to the lead and some slick jumping kept the pressure on his rivals in behind.

Us And Them tracked him into the straight and was gradually closing the gap after the final fence, but Ornua had enough in reserve to prevail by a length and three-quarters.

De Bromhead said: “It was brilliant for the horse and Davy game him a brilliant ride. He got him jumping great.

“I’m delighted to get it for John Phelan (part-owner), who is a great supporter of ours and it was lovely to get a Grade One winner here.

“He is a very good horse and he has done really well over fences. You saw his run at Sandown and even at Roscommon he beat Cadmium, so the form is strong.

“He is a real good horse and was probably just unlucky in the Arkle. It looks like it could be his track now. You won’t be able to keep us away!

“We will have a look at Punchestown and the two-mile novice chase there. He deserves a crack at it and hasn’t been busy.”

Phelan added: “I won the Scoop6 so I thought ‘easy come easy go’.

“I won about £130,000. I bought Ornua on a low budget and Henry picked him out and he has done fantastic.

“You don’t expect on a low budget to have a Grade One winner. I’m speechless really.”

Dan Skelton was delighted with the performance of the third placed Destrier.

“We were always coming here, so it’s not as if I wish we’d gone somewhere else, but I just feel there’s a bit more to come,” said the trainer.

“Punchestown is a possible. One of the owners lives in Ireland. I’m just delighted with the horse — he’s been a real improver with every run.

“I love him to bits. He’s only six and the winner is eight — there’s a lot more to come.”