Double up as Keane edges on in title race 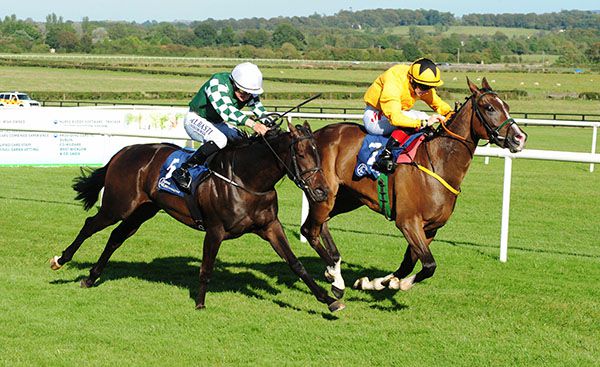 Colin Keane moved 2 ahead of Donnacha O’Brien (85 — 83) in the race to be champion jockey when doubling up at Naas on Luke Short in the Christmas Party At Naas Nursery Handicap.

Keane triumphed earlier for his boss Ger Lyons on Vormir in the opener.

Former champion jockey Keane came from the back on Luke Short after being slightly hampered leaving the stalls. Shines Her Light didn’t get a clear run and she was unfortunate not to catch Luke Short, going down by a head.

“When I saw where he was drawn I said to Colin to take his time and give him a chance. I’d say he’s quite a good horse but he’s weak and is going to improve a lot," said Meade.

“He’s always shown us a lot at home but even today walking around before the race you’d know looking at him that he’s still just a shell.

“Whether he was drawn out there or not I was going to tell him to take his time but I said to Derville (wife and owner) I didn’t think he was going to take that much time! He was nearly last turning in.

“He ran well before except at the Curragh where he hated the ground. I’d say he wants real fast ground. He’s the most beautiful mover you ever seen, and he’s eligible for the Foran race as well.

“I entered eight in it (Foran Series Final) this morning.

The Irish Horseracing Regulatory Board Veterinary Officer examined Golden Glow at the request of trainer, Aidan F. Fogarty, and reported the animal to be post race normal.

At the request of the Stewards, G.F. Carroll, rider of In From The Cold trained by Michael Mulvany, reported to the Stewards' Secretaries that his mount was outpaced early and had to wait for a run in the straight.

D. O'Brien, rider of Lampetia trained by A.P.O'Brien, reported to the Clerk of Scales that his mount got squeezed up in the straight.

W.M. Lordan, rider of Mythologic trained by A.P.O'Brien, reported to the Clerk of the Scales that his mount had no where to run in the last furlong.