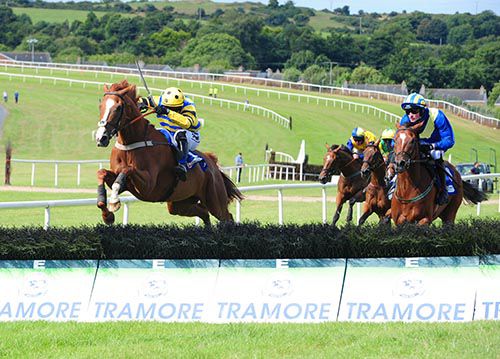 St Lawrence Gap bids for a third win in the Flynn Hotels Handicap Hurdle on the opening evening of the Tramore August Festival.

Eoin Doyle’s seven-year-old has the assistance of in-form claimer Darragh O’Keeffe as he tries to repeat his 2016 and 2017 victories in the corresponding event.

Doyle has won this race in six of the last seven years and his charge can successfully revert from running over fences to foil Monday’s Ballinrobe winner Zoffalee and the lightly-weighted Touch Of Gold Sole Pretender aims for a successful debut under Flat rules in the Sands Hotel Tramore (Ladies) Maiden after acquitting himself with great credit under top weight in the Galway Hurdle.

Norman Lee’s progressive Gold Well gelding was fifth to Tudor City in the Ladies’ Day highlight at Ballybrit and has the assistance of Lisa O’Neill in this two-mile event, where the returning Listen Dear looks the main rival.

The latter is trained by Willie Mullins and he looks to have strong prospects with the ex-French Quartz Du Rheu in the Victoria House Maiden Hurdle.

Fourth in a Listed hurdle at Auteuil last autumn when in the care of Guy Cherel, he will be difficult to beat at a track where his trainer is not averse to starting off a smart novice. Canadian Steel is well ahead of the handicapper under a mandatory penalty in the O’Neill’s Bar Handicap Hurdle and can follow up his recent Downpatrick victory for Noel Kelly and Jody Mcgarvey, while the locally-trained Carrigready can take the opening Pat Woodbyrne Memorial Beginners’ Chase for Vincent Halley and Danny Mullins.

Trainer Denis Hogan continues to be amongst the winners under both codes, and his Ballinrobe winner Generator City which he rides himself, can bounce back after an unplaced run at Galway in the Christy O’Connor Memorial Rated Novice Hurdle, while stable companion The Irregular has claims, if brushing up his jumping, under Sean Flanagan in the Three Ireland Rated Novice Chase.