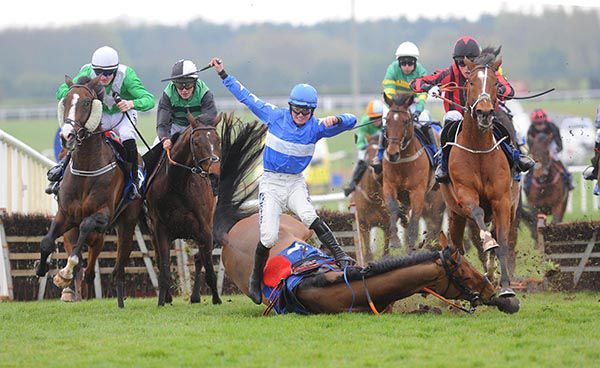 Scotch Quay made it a hat-trick of wins in the Boylesports Handicap Hurdle, scoring under Ricky Doyle for Eoin Griffin.

Having finally made the breakthrough at Clonmel last month, the son of Arakan followed-up at Wexford on Friday last.

Turned out again quickly, the six-year-old was sent off the 7/2 favourite this afternoon, racing in the colours of Griffin's wife Martina.

Settled behind the leaders, the bay victor came with his challenge approaching two out and soon improved into a narrow lead.

He was strongly pressed and headed by Breesy Mountain on the run to the last, but was soon left in a share of the lead again as that rival crashed out.

Scotch Quay picked up well from the last to go on score by five lengths, with No Way Jack (who was slightly hampered at the last) finishing second at 28/1. Luis Van Zandt (10/1) and Xinbama (25/1) completed the placings in third and fourth respectively.

Griffin said afterwards: "When a bit of luck comes your way you won't turn it down! Once he landed (after the last) he was flying but what would have happened you don't know.

"He deserves a little break now as he's had a hard two weeks. It's amazing what a win and a bit of confidence can do.

"He's taking the races well but we're doing nothing different with him at home. He's turned a corner and we're delighted as he's a real favourite at home.

"There is a two and a half mile novice handicap here at Easter that we might have a look at. Hopefully he can pick up another one."