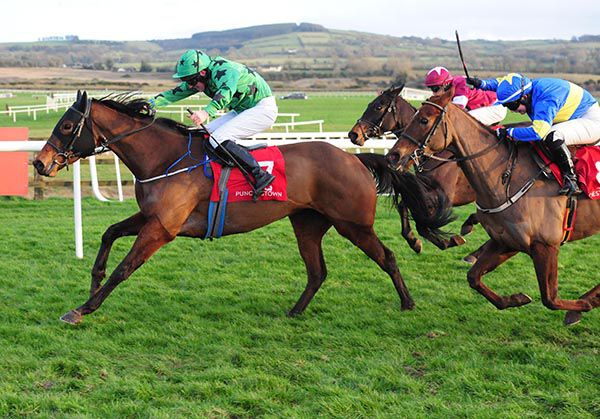 After an earlier win for Bob Murphy’s Darrens Hope there was further Deise joy at Punchestown in the concluding Irish Stallion Farms EBF Mares Flat Race with well-backed winning favourite Dreamingandhoping (15/8 into 13/8).

Owned and bred by Diarmuid Horgan and trained and ridden by Lisroe Farm, Cappagh, County Waterford operator, Queally, Dreamingandhoping got off the mark on her third outing, in a first-time hood.

The successful daughter of Shirocco travelled well into the straight but ultimately had to work to beat Beth Horan by three parts of a length.

They left Dysart Diamond six and a half lengths back in third.

Unfortunately Sacred Spring broke down at the three furlong point.

Queally trains with his father and namesake who was on lead-up duty here and junior said: “That was great. I came in after the last day in Limerick and held my hands up and said that was a disaster. She didn’t settle and we got it right today.

“She’s a good mare and should do plenty. She’ll be a lovely hurdler and a chaser — she's a huge big animal. I’m not sure what we’ll do for the rest of this season and we won’t rush into anything.

“It’s great for her owner Diarmuid Horgan. He’s a very patient man and his mother and father were very good friends with my grandmother who were all connected through dogs.”