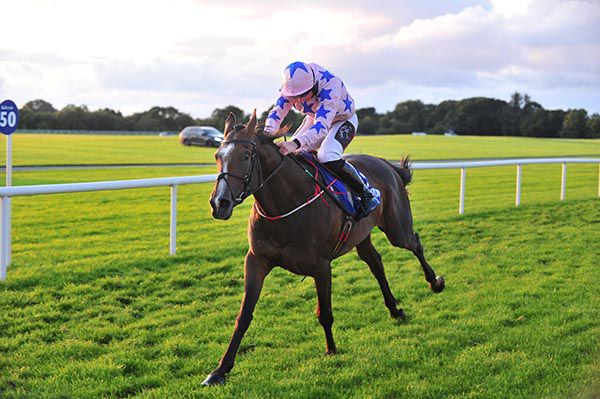 Druim Samhraidh got a deserved win to his name, as he ran out an easy winner of the bumper at Ballinrobe, the Cummins Homevalue Hardware INH Flat Race.

A good fourth of eighteen on debut at Cork last month, the David Dunne trained six-year-old since finished third at the Mallow venue a week ago to the day.

Having opened on-course at 6/1 this evening, the son of Puskin eventually went off at 4s under Jamie Codd.

Sent straight to the front, the bay gelding had all his rivals in trouble with over two furlongs to race, keeping on well under pressure from there, going on to score by ten lengths.

The Paul Gilligan trained Shanwalla (4s to 11/4) ran on into second, while newcomer Pencreek (13/8f) was a disappointing third, a further five lengths back under Patrick Mullins for his father Willie.

"It was great to get Jamie," said Dunne.

"When I rang him yesterday morning he said he'd ring back to let me know if he could ride in ten minutes.

"It took him half-an-hour. I'm sure he didn't fancy the drive to Ballinrobe without good reason!

"He's a gorgeous horse from the family of Dun Doire. With that pedigree we said we'd change tactics today and I knew it would take a good one to go by him.

"His half-sister Annie Angel won twice for the Skeltons recently and he was due this after two good runs at Cork."