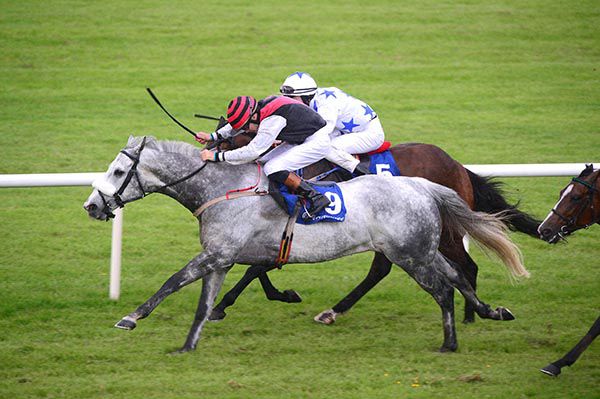 It wasn't a surprise to hear owner/trainer/breeder Donal Kinsella enthuse “I know he’s a handicapper but he’s a class act," after his eight-year-old Ducky Mallon returned off a 182 day break to win the Sign Up For A Tote Account Handicap at Fairyhouse.

It's obviously been a tough week for jockey Robbie Colgan after the loss of Lady Kaya, but he backed up a 20/1 success at Leopardstown last night on Galeola, winning at the same price aboard Ducky Mallon.

Now an eight time winner Ducky Mallon here held off a host of 'finishers,' triumphing by half a length and a short head from Sacchoandvanzetti and Nothing To Lose

“I asked Robbie Colgan not to be seen until the last 100 yards but he had to go after the other horse when he went three or four lengths in front.

“He only just gets the seven and no more. That ground is perfect, and if it was soft he wouldn’t have got there.”

The Irish Horseracing Regulatory Board Veterinary Officer examined Bay Of Skaill (GB), trained by Joseph G. Murphy, at the request of the Stewards and reported the animal to be post race normal.

R. Coakley, rider of Nothing To Lose trained by John C. McConnell, reported to the Clerk of Scales that his mount leaned right for the last furlong.

L.F. Roche, rider of Silk Cravat (GB) trained by John Geoghegan, reported to the Clerk of Scales that his mount met with interference leaving the stalls.